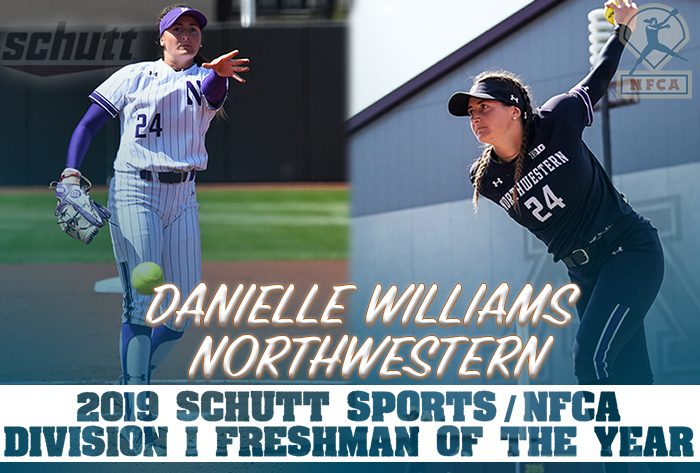 Williams becomes the first Freshman of the Year from the Big Ten Conference after being named the Wildcats’ first-ever top-three finalist. She led the Big Ten this season with 31 wins and 13 shutouts, ranking tied for third and fifth in the nation, respectively. It is the most victories and shutouts for a Northwestern pitcher in her rookie season since 1984.

Williams, the Wildcats’ first pitcher to earn Big Ten Freshman of the Year since 2004, is also ranked among the top 10 in the nation with 317 strikeouts (6th) and 9.7 strikeouts per seven innings (9th), while posting a 1.55 ERA with just 46 walks and a .163 batting average against. The rookie southpaw played a pivotal role in Northwestern’s first Super Regional appearance since 2008. Williams, a native of Pleasanton, Calif., earned first team NFCA All-Great Lakes Region recognition.

In its sixth year, the Schutt Sports / NFCA Division I National Freshman of the Year award was created to honor outstanding athletic achievement among Division I freshmen softball student-athletes. The top three and the winner are voted on by the NFCA’s Division I All-American Committee, consisting of one head coach from each of the Association’s 10 regions.

Related Items:Feature, Freshman of the Year