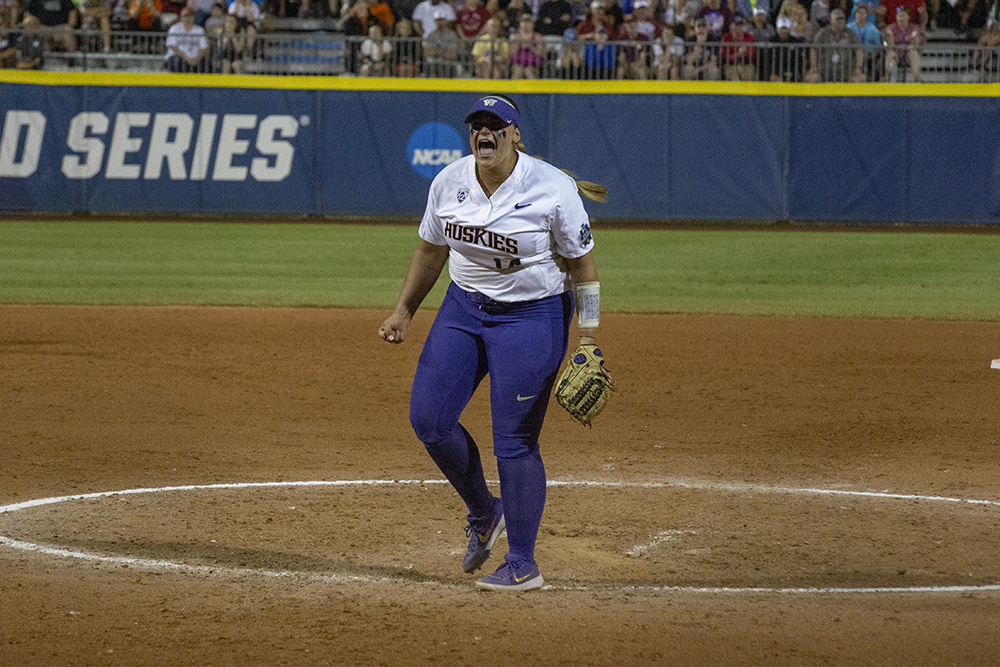 Survival Saturday saw another record setting crowd of 8,694 (a new official attendance for Session 4), a monster weather delay that last three hours and nine minutes, and a set of four unforgettable matchups. Here is the nitty gritty on how we got to Semi-Final Sunday.

No. 3 Washington 5, No. 7 Minnesota 3
The Gophers went out the way they came in, fighting until the very end. Minnesota mounted a late inning rally and pulled within two with the tying run and leadoff hitter, MaKenna Partain, at the plate. At this moment Washington lifted Gabbie Plain for Taran Alvelo to secure the final out. Plain pitched 6.2 innings sprinkling four hits and striking out ten Gophers. Alvelo needed just five pitches to secure the Huskies victory.

No. 8 Alabama 15, No. 5 Florida 3
Alabama brought the fireworks in a contest no one saw coming. Patrick Murphy’s squad started fast, putting up a six-spot in the bottom of the first inning and chasing Florida ace, Kelly Barnhill, after just 0.2 innings of work.

For Florida, Kendyl Lindaman (1) and Sophia Reynoso (2) collected RBIs via the long ball in the top of the fifth inning to help the Gators avoid the shutout.

The 15 runs against Florida are the most the Tide has scored against the Gatros since 1998. They scored 11 during that contest. The margin of victory also ties the third-largest in NCAA history.

Bailey Hemphill also made history when she hit her three-run home run; her 25th on the season surpassed Kelly Krestchman’s single-season home run record that has stood since 1998. She also secured the single-season RBI record with 82.

No. 3 Washington 1, No. 13 Oklahoma State 0
Courtesy Victor Anderson, In the Circle Podcast
After closing out Minnesota earlier in the day, Taran Alvelo record 16 strikeouts en route to another trip to the semifinals.

Alvelo was efficient and effective from first pitch. She struck out the side in two of the first the innings and didn’t look back. Her 16 K’s are the most for a UW pitcher in WCWS History and the most since Oklahoma’s Keilani Ricketts did it in 2016.

The Huskies’ lone tally came on an Amirah Malloy RBI in the fourth inning which proved to be more than enough. Samantha Show was valiant in a losing effort giving up the one run on six innings.

No. 8 Alabama 2, No. 6 Arizona 0
Courtesy Victor Anderson, In the Circle Podcast
Fans may have been concerned that the Crimson Tide used all of their offense against Florida but Montana Fouts made sure whatever the offensive produced was good enough.

Her three-hit shutout put Alabama into the semifinals and a rematch with Oklahoma. Bailey Hemphill continued her hot hitting day by smashing a two-run, two-out double in the third inning to put Alabama out front though it looked to be short lived as Arizona threatened with the bases loaded in the fourth. However, the SEC Freshman of the Year recorded a strikeout and a sharp liner to Hemphill to end the rally.

The ‘Cats threatened again in each of the last three innings, but Fouts shut then down to preserve the victory.