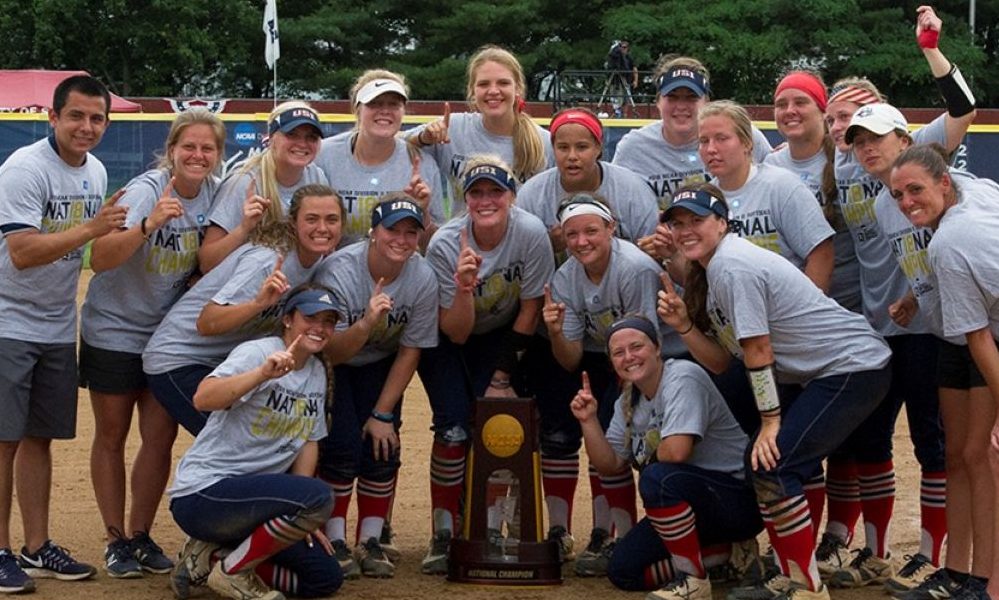 As 2018 comes to a close, we look back at some of the most memorable softball games of the past year which includes two classic Super Regional series and three match-ups between international rivals Japan and the United States.  Here are FPN’s top 18 softball games of 2018.

Cortni Emanuel sends Georgia to its 4th WCWS in dramatic fashion with an 8th inning solo home run as the Bulldogs defeat Tennessee 2-1 in Game two of this Super Regional.

Tennessee responded in the bottom of the seventh, as consecutive singles led to a run scored by freshman pinch hitter, Brooke Langston.

Tied up at one, the teams headed to extra innings. Things started off dismal for the Bulldogs in the top of the eighth, as sophomore Jordan Doggett struck out swinging, followed by a fly out from senior right fielder Kendall Burton.

But then Emanuel stepped up to the plate and blasted a two-out home run to center field to give the Bulldogs the eventual winning run.

Shelby Pendley delivered a two-run home run to erase a late deficit as the USSSA Pride took game one of a best-of-five Championship Series against the Chicago Bandits, 3-2. Pendley, whose deep fly came in the fifth inning with the Pride facing a one-run deficit, provided the final blow against Bandits southpaw Danielle O’Toole. The Pride went on to sweep the Bandits in three games to win the NPF Championship Series for the first time since 2014. Pendley was named NPF Championship Series MVP.

Sophomore Lizzie Annerino collected her first-career win pitching 4.2 scoreless innings of relief with only four hits allowed, while seniors Kaitlin Sahlinger and Emma Wong went a combined 3-of-4 with four RBIs to lead Boston University to victory. A win that shocked No. 1 and two-time defending national champion Oklahoma at New Mexico State’s Troy Cox Classic. BU’s Head Coach Ashley Waters appeared on Feb 22 edition of In The Circle to recap the historic win over the Sooners.

Valerie Arioto hit three home runs leading the USA Red team to a Gold Medal at the International Cup with a 10-5 win over Japan. As a team, USA Red hit six home runs to overpower the Japan pitching staff that had only given up one home run in the entire International Cup prior to the Gold Medal Game. Japan trailed 4-1 early in the game but chipped away and tied things up at five in the top of the fifth when Saki Yamazaki hit a 2-run homer off Monica Abbott who had entered the contest in relief.

But Arioto would have an answer in the bottom of the fifth when she hit a solo home run, her second of the game, to give USA Red the 6-5 advantage. Michelle Moutrie also added a solo home run of her own with one out in the same inning to extend the lead, 7-5.

Arioto put the game away with a three-run shot in the bottom of the sixth to give USA Red a 10-5 lead they would not relinquish. Arioto finished the game going 3-3 with three home runs, five runs batted in, and four runs scored.

Second baseman Becca Schulte sent a ball through the left side to drive in Amanda Doyle to claim the walk-off victory for LSU in 14 innings over Auburn. The game marked the SEC debut of new Auburn Tigers Head Coach, Mickey Dean.

HERE IT IS! The game-winner from @Becca_Schulte to give the Tigers their first SEC victory of 2018! WHAT. A. GAME. #OnBoard pic.twitter.com/xDshAZKqnY

Pittsburgh was one out away from winning the ACC Championship game and earning the automatic bid into the NCAA Tournament. But a sign of things to come in the postseason, trailing 4-1 entering the bottom of the seventh, the Noles scored four runs, including a three-run, walk-off home run from Anna Shelnutt to claim the 5-4 victory over Pitt. The game would turn out to be the last for Panthers Head Coach, Holly Aprile, as the Panthers would be snubbed from the NCAA Tournament, deemed one of the last four teams out.

In the a game that tied a SEC record for most innings played in a conference game, the LSU Tigers defeated Ole Miss 2-1 in 19 Innings. Allie Walljasper broke the LSU and SEC record for innings pitched in a game and set a career-high 19 innings in the circle to get the win. Ole Miss’ Kaitlin Lee was the tough luck losing pitcher going 18.2 innings as Lee gave up a two-out walk off to Amanda Doyle who hit a blooper into shallow left field to score Taryn Antoine from second base and securing the Tigers’ win.

HERE IT IS! @amandadoyleeee's FOURTH walk-off of the year, coming in a 19-inning showdown to defeat Ole Miss, 2-1! #OnBoard #GeauxTigers pic.twitter.com/iX4e0wyXBT

Sis Bates hit a two-run single in the seventh to tie things up with Taylor Van Zee’s single to center scoring Kelly Burdick in the ninth to give Washington the come from behind win over Alabama. The Huskies would win game two and advancing to the Women’s College World Series.

The Noles were looking at getting eliminated for 2nd straight season at home by LSU. The Tigers won game 1 and despite the Noles fast start in Game 2 as they led 5-1. One had to wonder if history would be repeat itself as LSU came back and tied it up on a grand slam by Samantha Sanchez in the bottom of the fifth inning. Florida State and LSU would both have chances to win the game but were unsuccesful until the 11th inning when Carsyn Gordon gave the Seminoles a 6-5 lead with a solo home run to left with one out in the top of the 11th. Sydney Sherrill followed with a single through the right side and Ana Shelnutt crushed a two-run HR to Spirit Way beyond the wall in left for an 8-5 FSU advantage  in Game 2 of the Super Regionals which the Noles would hold on to win and carry momentum into Game 3 as FSU would defeat LSU 3-1 to advance to the Women’s College World Series.

A back and forth affair that saw Southern Arkansas’ senior Megan Godoyo empty the bases with a grand slam that supplied four very important insurance runs, junior relief pitcher, Brooke Ford-Nelson, held off the Wildcats who responded with four runs of their own before the Lady Muleriders closed out the game and eliminated Chico State.

The Bruins were four outs away from reaching the Women’s College World Series Championship Series. The Bruins were four outs away from securing the national title went to the Pac-12 for the first time since 2010 as its presence would have resulted in a UCLA-Washington series. But Elizabeth Mason and the Florida State Noles had different ideas. Mason blasted a three run home run off National Player of the Year, Rachel Garcia, with two outs in the bottom of the sixth to give the Noles a 3-1 lead they would not relinquish. FSU eliminated the Bruins in a winner take all game to advance to the National Championship Series.

Elizabeth Mason goes YARD in the bottom of the 6th to give @FSU_Softball the lead! #WCWS pic.twitter.com/71Dq3OktUa

Virginia Wesleyan took Game 1 earlier in the day and mounted a rally in the bottom of the 7th of Game 2 scored two runs on a sacrifice fly to left and a single to shallow left which forced the game into extra innings.

But Illinois Wesleyan would respond as Shelby Fulk set the table for the Titans in the eighth by tripling to left centerfield with one out. With the go-ahead run standing at third,  Maggie Graham responded by lacing a double to nearly the same spot to score Fulk and give IWU a 5-4 lead.

Brea Walker shut the door on the Marlins in the eighth by sending them down in order and force a Game 3. Virginia Wesleyan would go on to win game 3 to win 2nd straight National Championship. But Illinois Wesleyan pushed them to the limit.  You can listen to Virginia Wesleyan’s Head Coach Brandon Elliott recap National Championship run on the June 18th edition of ” In The Circle”

Saint Leo had momentum after eliminating the No. 1 overall seed in North Georgia earlier in the day and held a 4-2 lead over Southern Indiana in the top of the sixth inning before Mother Nature came calling and conditions were deemed unplayable. The game was halted until Sunday morning when the momentum swung to the Screaming Eagles. Saint Leo went down in order in the sixth before the Eagles made it 4-3 with a run in the bottom half of the sixth frame. On her birthday, Claire Johnson, tied the game up with a solo home run in the seventh to send the contest into extra innings and would win it in eighth inning to send Southern Indiana to Championship. The Screaming Eagle later went to win its first national championship title.

It is the Play of the Year in 2018. It is a play that went a long way in helping Florida State win the game and eventual National Championship. What is forgotten was the entire well played, old school game versus the Noles and the Huskies that saw Meghan King and Gabbie Plain throwing gems. In the top of the sixth, Anna Shelnutt launched a 3-1 pitch into the seats beyond the wall in left center to give the Noles the only run it would need over Washington. It was the fourth home run by Shelnutt in the 2018 postseason. But Jessie Warren made the play of the game in the bottom of the seventh to help lead the Noles to victory. FSU would win he National Championship the next night, 8-3, over Washington.

What will go down as one of most memorable Super Regional series in Division II, we had to put entire series into our countdown!

In game two, Saint Leo was three outs away from a trip to World Series holding a 5-2 in the seventh. But Alabama-Huntsville would rally, loading the bases, and scored on a walk to close the gap, 5-3, before a walk-off grandslam by Kia Akles gave UAH the dramatic 7-5 win and forced a winner take all game three. Saint Leo jumped out to a 6-0 lead in game three but had to hold off a late run by the Chargers who pulled within 6-3 in the seventh and loaded the bases similar to game two. This time, Saint Leo withstood as UAH’s Amber Hammonds lined out to Kacie Kelly for the final out of the game.

SAINT LEO WINS!!!!! WE ARE HEADED TO SALEM AS THE SOUTH REGION CHAMPIONS!!!!!! #GoSaintLeo #NotDoneYet pic.twitter.com/XW022xs33v

The wildest Super Regional of the 2018 D1 NCAA Tournament took place in Gainesville. In game one, the Gators came from behind with three walks and two crucial Aggies errors to walk off (5-4) via Janell Wheaton. In game two, the Aggies responded with their own drama in bottom of fifth when Tori Vidales hit a three-run home run to give the Aggies the eventual victory, holding off the Gators to win 5-4 and force a winner take all game three.

In the final contest of this Super Regional, Vidales looked to be hero again as she homered to dead centerfield off Aleshia Ocasio scoring Sarah Hudek to give Texas A&M a 3-2 lead in the top of the seventh. Trinity Harrington, who reentered the game in the bottom of the seventh inning for the Aggies, faced Jordan Matthews who was down to her last strike before blasting a home run to left-center, putting the Gators up 5-3, and sending Florida to the WCWS for the ninth time in program history.

Rachel Garcia hit a walk-off single in the bottom of the eighth to send the United States to the Gold Medal game.

A classic that needs no explanation, the USA took home the Gold and qualified for the 2020 Olympics!