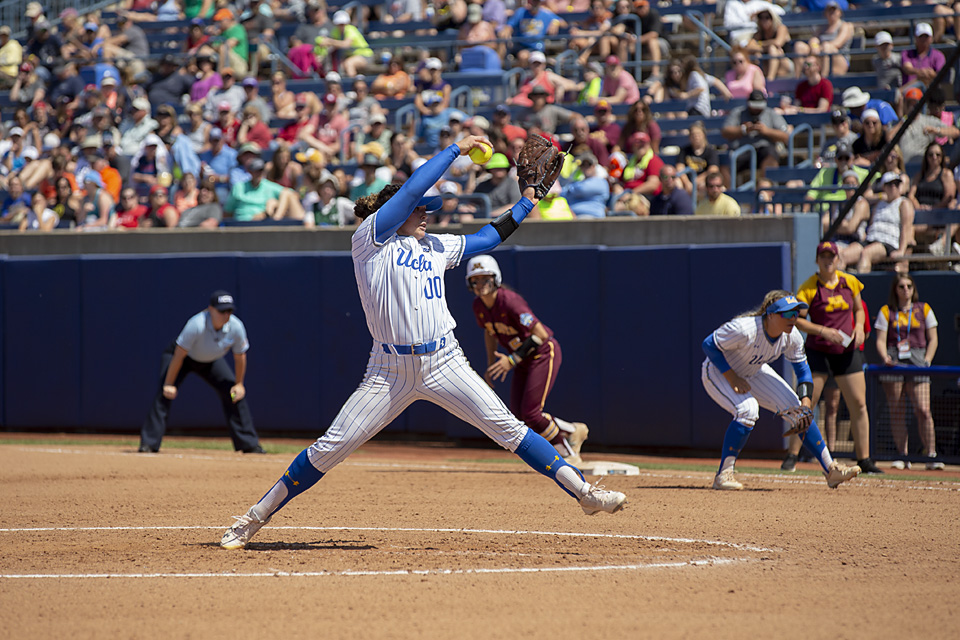 RS-Junior pitcher Rachel Garcia (Palmdale, Calif.) of the UCLA softball team was named the Collegiate Woman Athlete of the Year and presented with the prestigious Honda Cup during the June 24th live broadcast of the Collegiate Women Sports Awards (CWSA) presented by Honda on CBS Sports Network, held at the USC Founders Club at Galen Center in Los Angeles. Honda has served as the awards show’s presenting sponsor since 1986, supporting women’s athletics programs for more than 30 years.

The “Top Three” finalists from the Class of 2019 included Garcia along with senior basketball star Megan Gustafson of the University of Iowa and senior swimming & diving sensation Lilly King of Indiana University.

Garcia is a two-time Honda Sport Award winner for Softball and was named the Most Outstanding Player of the 2019 Women’s College World Series after leading the Bruins to the program’s 13th National Championship. She has won back-to-back USA Softball Collegiate Player of the Year honors and is a two-time NFCA first-team All American. This year she was named the Pac-12 Player and Pitcher of the Year, making her the first-ever player to earn both honors in a single season. Garcia led the Bruins with a 1.14 earned run average, a 29-1 record, four saves and 286 strikeouts in 202 innings. She went 9-0 in the NCAA Tournament with a 1.49 ERA and 79 strikeouts in 65 2/3 innings and also led the team with 16 RBI. She led all postseason players in wins and RBI. On the season, she hit .343 with 11 home runs, 57 runs batted in and a team-best 35 walks.

“We congratulate Rachel and the outstanding Class of 2019,” said American Honda Vice President of Corporate Relations & Social Responsibility Steve Morikawa. “These student-athletes have demonstrated excellence not only in their respective sports, but in the classroom and community too. We are proud to partner with CWSA to honor their achievements.”

“Twenty-six years after Lisa Fernandez won the Honda Cup, her recruit, Rachel Garcia, earns the same prestigious award,” stated Jean Lenti Ponsetto, Chair of the CWSA Board of Director. “What an exciting honor to share with her coach, the rest of the UCLA coaching staff and her teammates. She competed with fierceness and intensity, whether she was in the circle or at bat, making her a special student-athlete and the best of 2019.”

“We welcome Rachel into the elite sisterhood that for 43 years has been the ‘best of the best’ in college athletics,” stated Chris Voelz, CWSA Executive Director. “Rachel certainly has earned this recognition through demanding pitching and hitting battles which resulted in UCLA winning it all. It is exciting to have generational winners where one generation passes along the ‘power of dreams’ to another. We are thrilled to claim Rachel as our best and to cheer her on as she represents CWSA, UCLA and herself on the national and world stage.”

The CWSA, now in its 43rd year, honors the nation’s top NCAA women athletes by recognizing superior athletic skills, leadership, academic excellence and eagerness to participate in community service.  Since commencing its sponsorship in 1986, Honda has provided more than $3.4 million in institutional grants to the universities of the award winners and nominees to support women’s athletics programs at the institutions.