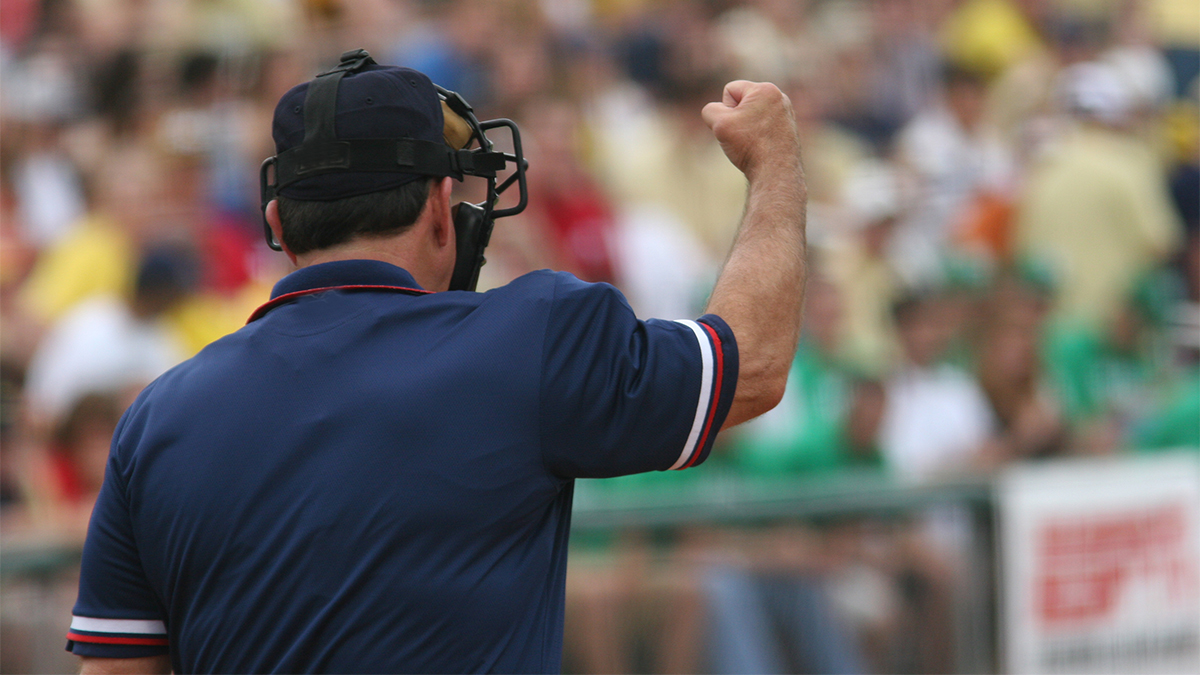 A topic that always stirs much conversation, let’s chat about the state of officiating and umpiring in our youth game then check out our other “Summer Reflection” articles below. I want to focus mostly on youth ball as there is a huge difference between youth or travel ball and collegiate level officiating. Like it or not, they are different.

Strengths and Weakness in the Game
Recruiting
Technology

I’m going to make a statement I’m sure will get a few comments and jokes: this summer, I saw some really great officiating! There were some bad moments and a few individuals I thought could use some more training but in general, it was pretty solid. I saw some excellent game management and rule executions in a number of odd or difficult situations especially at PGF and Atlanta Legacy.

What I also saw was some terrible treatment of said officials. Something has to give, folks.

There is a national shortage of officials in all sports and it’s becoming a huge problem. Between treatment from parents, coaches, and even players to pay issues and more there are big problems. I often hear people complain about only having one softball umpire on the field acknowledging that isn’t enough to call the most fair game while in the same breath verbally abusing said official on the field. Especially at the higher levels of play, tournaments want to put at least two officials on the field but there is a huge problem: finding the bodies to staff that need which can lead to simply trying to find bodies, regardless of skill.

Being an official is tough, I tried my hand at it for a few years, and while I did enjoy it I ultimately walked away due to too many demands on my schedule and I can’t say I miss the behaviors of coaches and parents.

I can promise you this, the vast majority of officials across all sports don’t want to screw up. They don’t want to suck. They don’t want to make the wrong call. I promise you. But part of having human officials is that human error that is going to happen – especially in youth sports. I am excited for the day collegiate softball is fully integrated with replay. It isn’t perfect either, we saw the hiccups at the 2019 SEC Tournament, but it will be beneficial to have. But that isn’t going to change anything on the youth front, human officials with a range of abilities and often understaffed organizations will always be an aspect of the game. So what can we do? Because things are only getting worse; you see stories of adults bullying kid officials at the youngest level of play, you see the fights break out, you hear about the assaults that occur – what are we doing?! Why do we think the moment someone puts on that blue shirt they are no longer a human being and therefore these behaviors are suddenly acceptable …encouraged almost.

“Razzing” an official here and there is part of the game, and I believe most officials will tell you that doesn’t bother them. The “ohhhhh, where was it blue!?” comments or the exasperated signs and “ahhhhhs” that come on the heels of a close call are all part of it all.

What isn’t part of it is the on going passive aggressive chatter or consistent revisiting of a call that happened five innings ago and surely not the physical attacks you hear reported from time to time. It’s ridiculous.

I have a theory that if you secretly filmed people during games and showed them months later in a non-sporting situation, most people would be embarrassed by what they saw: I’d sure hope so at least. I remember at PGF, I was sitting next to an individual and I will admit there were some bad calls made during this game but when it ended this person start going off about how, “I sure hope they are walking straight to their car and quickly…” I had to ask this person about it. “Are you literally threatening this official? Because it sounds like you are.”

First and foremost coaches, parents and players have got to be better. If that can improve we can start to solve the issue of decreasing official numbers and a lack of retention. Most of us can probably pinpoint a time we were present at a game where we were taken aback by the treatment of an official. Sometimes it really makes you wonder why anyone would want to do this job; which is the entire point.

From there, we need to help our officials improve. We need to set them up to succeed. What kind of training – and on going training – does your local city, recreational department, sanctioning organization have? How can it be improved? Who is willing to step up? I understand these things take time, sometimes money, and people dedicated to the process but it’s so necessary.

When I started officiating I can tell you I was put into a few situations I wasn’t ready for – and I was by myself. This isn’t a recipe for success for the official or the teams on the field. I played the game my whole life, I coached 12U and 14U youth ball, I worked around a collegiate program, I studied the rule book and researched all I could find. But I was still new and I wasn’t prepared or trained enough for some of the situations I found myself in. To be really honest, I didn’t have to attend a single training before jumping on a field.

My UIC came to a game after I had a few under my belt to watch and give me some tips, which was incredibly helpful but again, that was all I got in the way of training. I also wasn’t notified of any continued learning opportunities I could pursue on my own; I’m not even sure if there were any.

So improvement has got to start at the “grass roots”, local level. Parents and coaches, contact your league and see what opportunities are in place for continued umpire development. Can you get involved? Coaches, offer to have umpires come to a practice and call a scrimmage. Have them come to practice to where your team is working on throws home and plays at the plate, let them work on getting into position and things of that nature.

Parents, get involved too. It may sound crazy and also cliche but can you help out? Try your hand at officiating, even your local recreational 8U/10U league or even simply volunteer during your younger children’s games when parents help officiate things. It will help you get a taste for how difficult it actually is, it will help “humanize” these roles.

Do your youth leagues utilize teenagers as officials? Sign your kid up. There are tons of reasons why it can be beneficial including a way to give back to the game, a first job, learning about the game at a different level, teaching them (and you) the challenge of officiating, and much more.

Get creative, reach out to people! Do you have a few good and experienced umpires within your cities, systems, organizations, etc? Reach out to them! Work with them on putting together training days, mentorship opportunities, creating a community where officials can turn to one another for growth, help, and development! There are options for proactively bettering the game on the officiating level.

Next, once more training and development is put into place we can turn to addressing the biggest issues we see in officiating right now that include the consistency of calling (or not calling) illegal pitches, out of the box, and positioning. But until organizations and communities are able to recruit people who are interested in officiating, TRAIN THEM, and retain them long term, it’s going to be difficult to encourage improvement and development across the board.

And yes, to be fair, there are some officials out there that aren’t in it for the “right” reasons; there are some “bad” officials on diamonds across the country but in general, that isn’t the majority. Let’s focus on those people and how we can improve this crucial aspect of the game together.

USA Softball has announced their 2020 Umpire School Dates, look into it! See if there is a location near you and get your local officials out to it! If you are a recreational or organizational director reach out and see if you could even go watch to get ideas for something you could do in your community. Take advantage of opportunities like this especially as they can be rare.