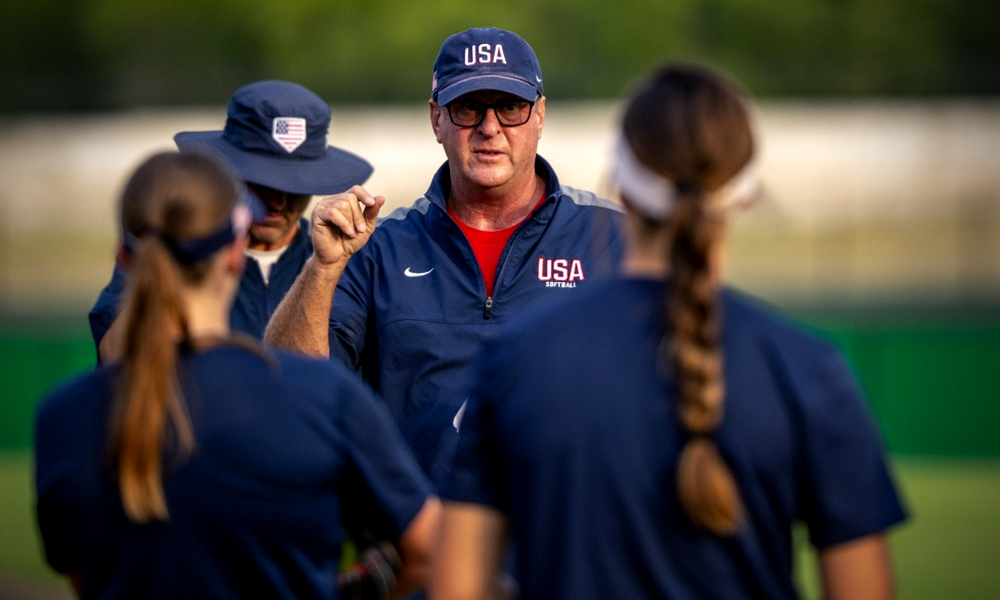 OKLAHOMA CITY – USA Softball, the National Governing Body of Softball in the United States, is proud to announce long-time Women’s National Team (WNT) leader Ken Eriksen (Tampa, Fla.) as the Head Coach for the Tokyo 2020 U.S. Olympic Softball Team. Selected by members of the USA Softball Women’s National Team Selection Committee (WNTSC), Eriksen will lead the Red, White and Blue in their return to the Olympic Games as Team USA looks to reclaim the Gold Medal from host country Japan.

“Ken Eriksen has a proven track record in not only leading our Women’s National Team program to the top of the podium, but also maintaining that success and developing world-class athletes,” said USA Softball Chief Executive Officer (CEO), Craig Cress. “His accolades speak volumes and in the 11 years that softball has been off the Olympic program, he has been a constant for our Women’s National Team. He has built upon the legacy established before him, and we are confident that he will guide the team to the Gold in 2020.”

Eriksen’s journey to Olympic Head Coach began in the 1987 as men’s fast pitch player before transitioning into coaching within the USA Softball WNT program in 2002. Currently the Head Coach at the University of South Florida, Eriksen has previous Olympic experience, having served as an Assistant Coach for the 2004 U.S. Olympic Softball Team.

“First of all, I am humbled by the fact that I am able to follow in the footsteps of two of my mentors in fast pitch softball, Ralph Raymond and Mike Candrea, the last two coaches to lead Team USA in the Olympics,” said Eriksen. “Coach Raymond and I had shared a few dinners and talked the game many times over the last 25 years. I will miss him tremendously. Coach Candrea’s philosophy has been one for the ages. He always puts the ‘game’ above everything. It’s all about the ‘game’ and how you approach it with people that fit your approach as a coach. His simplicity and his athlete-centered approach has lent itself well to Team USA even after he retired from the National Team.”

Eriksen is establishing himself as one of the winningest coaches in USA Softball WNT history and currently sits second in wins for the program behind fellow Hall of Fame coach Ralph Raymond. Compiling a 52-4 record at the helm of Team USA in major international competitions (Olympic Games, World Baseball Softball Confederation (WBSC) World Championship and Pan American Games), Eriksen will look to lead Team USA in its quest to claim the Gold Medal in Tokyo.

Since taking over the WNT program in 2011, Eriksen ushered in a new era of USA Softball with a roster comprised of international rookies.

“To be handed the keys to this program back in 2011 after all the great players retired from Team USA was a challenge and an honor,” Eriksen continued.

While continuing the legacy established before him, Eriksen has provided a steady constant for the program during the years softball was not a part of the Olympic Games platform.  Fostering an “us” environment, Eriksen’s dedication and commitment to the USA Softball WNT program culminated with a Tokyo 2020 Olympic Games berth which was earned at the 2018 WBSC World Championship last August in Chiba, Japan.

“Winning the World Championship and the Olympic bid in 2018, it was an affirmation of how Team USA has approached and prepared for the biggest stages since our first National Team Program was put on the field.”

As a player, Eriksen began playing USA Softball when he joined the Clearwater Bombers, playing from 1987-1992 while batting .347 in 1992 and .456 in the Men’s Major Fast Pitch Nationals. Eriksen was a part of the Miller-Toyota team and Tampa Smokers up until 1997 when he won the Men’s Major Fast Pitch National Championship with his fellow teammates. Eriksen racked up additional honors on the international scene, earning a silver medal at the Pan American Games (1991) and was a three-time Olympic Festival participant (1993, 1994 and 1995), where he took home an additional silver medal at the 1995 Olympic Festival. Eriksen also played for the USA Select Team in 1988, which was the first American athletic team to compete in Cuba in over 30 years.

After hanging up his cleats as a player, his first Head Coach role with the USA Softball National Team program came in 1997 when he led the USA Softball Junior Men’s National Team (JMNT) at the WBSC Junior Men’s World Championship in St. John’s, Newfoundland. Five years later, he joined the WNT as an assistant coach in 2002 – the same year the team captured a Gold Medal at the WBSC World Championship. A highlight of his Team USA coaching resume includes being an assistant coach in the 2003 Pan American Games where the team won Gold and going on to coach at the 2004 Olympic Games in Athens where the U.S. Olympic Softball Team would put on one of the most dominant performances in Olympic history. Eriksen tacked on another Gold Medal as an assistant coach at the 2010 WBSC Championship in Caracas, Venezuela before his Head Coach appointment in 2011.

With softball off the Olympic program following the 2008 Beijing Olympic Games, Eriksen was instrumental in continuing the gold standard set by his predecessors – often times with rosters comprised of rookies and veterans of the international stage. In his tenure as Head Coach, Eriksen has guided the U.S. to two WBSC World Championship Gold Medals (2016, 2018) and two Silver Medals (2012, 2014), a Pan American Games Gold Medal (2011) and Silver Medal (2015). Through it all, Eriksen credits the athletes within the program.

“The players that kept the dream alive for every girl that has played this game deserve all the credit,” said Eriksen. “There have been so many who’s names will not be on the roster in Tokyo that have helped us maintain a gold level standard. I will never forget what they did for this program and for the United States.”

Collegiately, Eriksen has been at the helm of the University of South Florida softball program since 1996.  Since Eriksen’s first year, the Bulls have gone to 14 NCAA post season appearances, two NCAA Super Regionals, a College World Series berth, seven conference titles (in three conferences: SASA, BIG EAST, and The American), has produced 975 wins and a numerous amount of All-Americans, Academic All-Americans, All-Conference players, and NCAA All-Region players.

“I am proud to be selected as the next head coach to lead Team USA to its re-entry into the Olympic Games in Tokyo 2020. It goes without saying that if you don’t have people and an organization that believes in you none of this is possible. I’ve been fortunate to have had a tremendous amount of support from family, the National Governing Body, the NFCA, USF, Assistant Coaches with our Team USA program, and lastly many USA alums from both the men’s and women’s programs. Thank you to the USA Softball National Team Selection Committee and Board of Directors. We hope to continue to represent the Red, White, and Blue in the class manner that we have. Go Eagles.”

For the latest information on all of the USA Softball National Teams visit www.USASoftball.com.