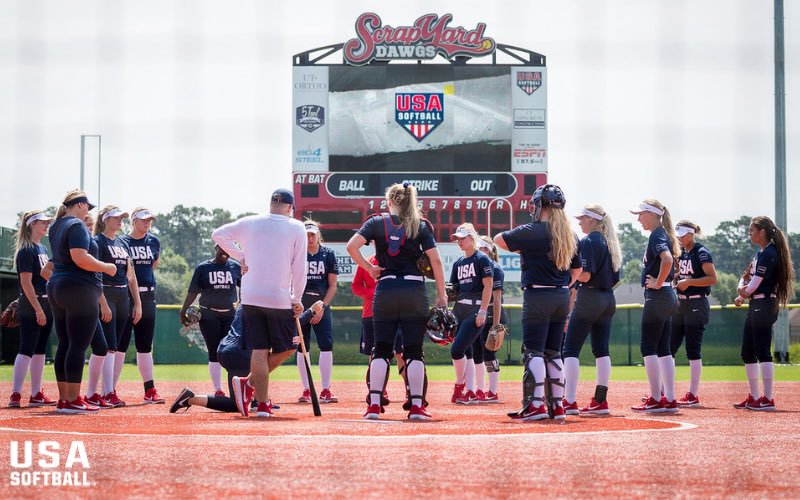 HOUSTON – With their backs against the wall the U-19 Women’s National Team pulled out a late rally with a walk-off single from Julia Cottrill (Stillwater, Okla.) taking the nightcap 3-2 over Texas Bombers GOLD. USA took the Saturday opener 8-1 over Mizuno Impulse seeing a pair of two-run home runs from Bailey Dowling (St. Joseph, Ill.).

Bailey Dowling (St. Joseph, Ill.) wasted no opportunities at the plate driving in five of the U-19 WNT’s eight runs. Dowling crushed a two-run bomb in the second that cleared the towering scoreboard in left field before homering back to left in the fourth giving USA it’s largest lead of the contest.

The Red, White and Blue got back the run they surrendered in the top half of the first with Dowling driving in Cottrill (Stillwater, Okla.). A bases loaded walk to Taylor Pleasants (Houston, Texas) gave USA the lead while Jadelyn Allchin (Huntington Beach, Calif.) made it 4-1 with a two-RBI double to left.

Lexi Kilfoyl (Land O’ Lakes, Fla.) picked up the win tossing the first four innings where she allowed one run, which was unearned, and struck out three.

The U-19 WNT put up a crooked number in the second and fourth courtesy of Dowling’s long ball to take an 8-1 lead where it remained the rest of the way.

Out of the pen, Kelley Lynch (Newnan, Ga.) came in to shut down the Mizuno Impulse offensive. Lynch struck out four in two innings of work and did not allow a hit while walking two.

Heading into the bottom of the sixth, the U-19 WNT knew it was going to be their final at bat while trailing 2-1 due to a time limit. The Red, White and Blue showed no panic at the dish with Charla Echols (Newnan, Ga.) leading off the home half of the inning with a double off the center field fence. Dowling did what she does best, sneaking a double down the left field line scoring Echols to tie things up at two apiece.

Dowling moved over to third on a wild pitch before Cottrill took a 1-1 pitch down the right field line scoring the winning run.

Things started out as a pitcher’s duel where starter Megan Faraimo (Vista, Calif.) was on another level. She struck out nine of the first 11 hitters she faced in the no decision out. In four innings of work she allowed two hits, no walks and struck out a total of 10 Bombers.

Jayda Coleman (The Colony, Texas) had the U-19 WNT’s lone hit as the two foes went scoreless through the first four frames. Inclement weather moved its way into the area forcing a hour plus lightning delay in the top of the fifth.

Allchin broke the scoreless tie following the delay in the bottom of the fifth scoring Skylar Wallace (Woodstock, Ga.) who led off the frame with a single. The Bombers responded scoring two runs on reliever Rylee Trlicek (Hallettsville, Texas). Kathryn Sandercock (McLean, Va.) came in to record the final out in the sixth before the U-19 WNT began their comeback efforts.

CONROE, Texas – Mother Nature had other plans for the U-19 Women’s National Team as inclement weather forced the cancellation of Sunday’s game versus the East Cobb Bullets and Impact GOLD at the ScrapYard Sports facility. The Red, White and Blue were tied at 1-1 with the EC Bullets after two innings of play before serve weather re-entered the area ultimately forcing the cancellation of the remainder of the game.

The U-19 WNT went 3-0 while in Houston for training including a 3-2 walk-off single victory Saturday against the Texas Bombers GOLD.

Offensively, USA were swinging hot bats hitting .357 where they outscored their opponents 29-6. Chara Echols (Newnan, GA.) led the way going 8-for-11 with a pair of doubles, a triple and a RBI. Bailey Dowling (St. Joseph, Ill.) was the run producer with a team-best seven RBI. Going 5-for-9 at the plate, Dowling launched two home runs, a double and drew one walk. Julia Cottrill (Stillwater, Okla.) had a hot bat driving in six runs on a pair of singles. Taylor Pleasants (Houston, Texas) was 3-for-6 in nine plate appearances where she recorded five RBI on a pair of doubles while drawing three walks.

In the circle, Lexi Kilfoyl (Land O’ Lakes, Fla.), Megan Faraimo (Vista, Calif.), Montana Fouts (Grayson, Ky.), and Kelley Lynch (Newnan, Ga.) all tossed four innings of work. Kilfoyl and Faraimo did not allow an earned run with Faraimo struck out 10 in her outing. The U-19 WNT pitching staff recorded a combined 1.66 ERA during the three game span.