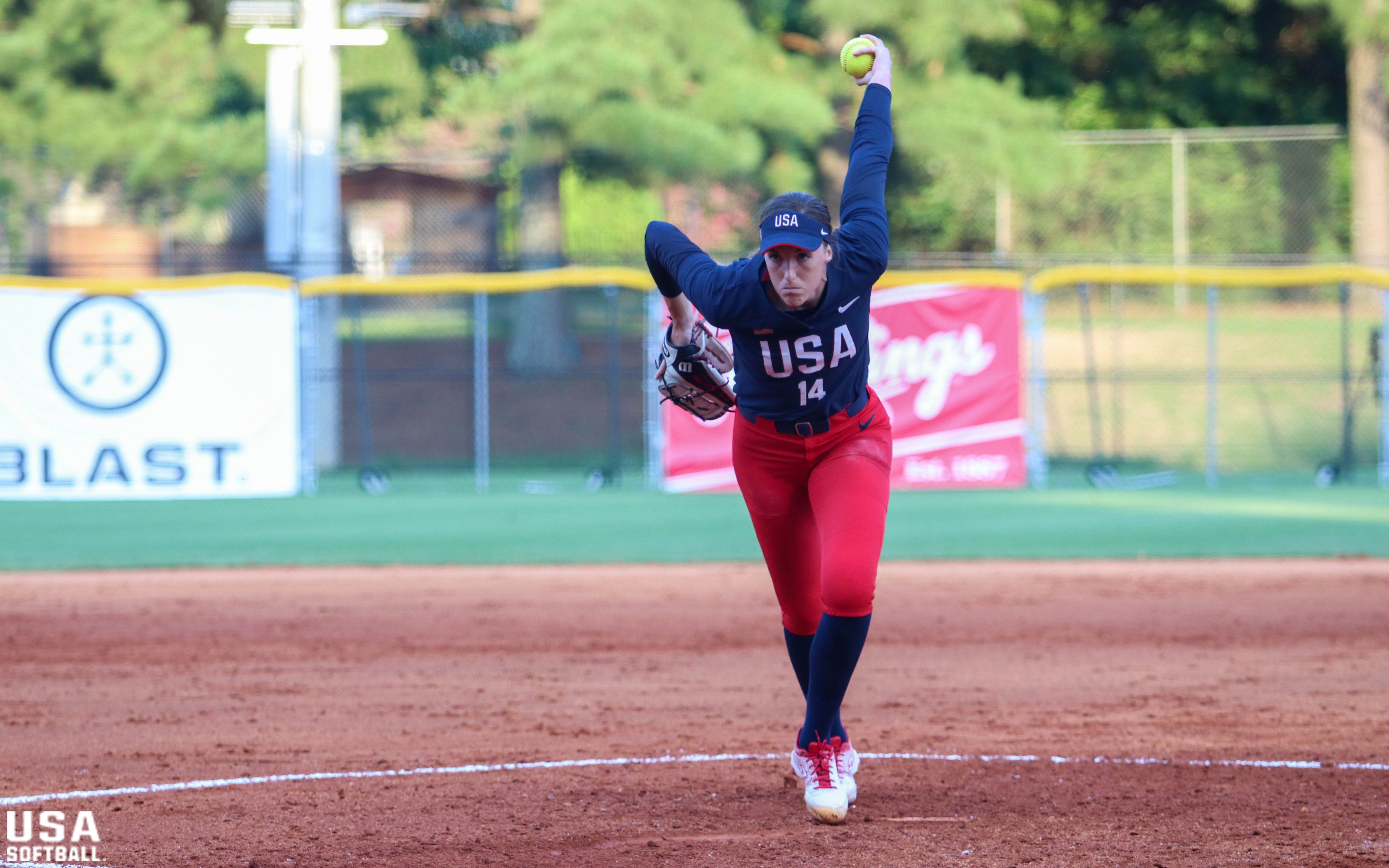 The U-19 WNT scored four runs in their first at-bat and never looked back as the team combined for 11 hits in a 9-0 (five innings), shut out win over Peru. In the team’s opening contest of the USA Softball International Cup, three U-19 batters had multi-RBI performances at the plate while Kelley Lynch (Newnan, Ga.) and Callie Turner (Land O’Lakes, Fla.) combined for the no-hitter.

Lynch got the start in the circle, fanning three batters to bring the U.S. to the plate. A leadoff triple by Skylar Wallace (Woodstock, Ga.) put the first runner on base until Charla Echols (Newnan, Ga.) drove her in with a single to centerfield. Two batters later, a two-run shot by Jayda Coleman (The Colony, Texas) and a solo blast by Julia Cottrill (Stillwater, Okla.) quickly made it 4-0 in favor of the Red, White and Blue.

Another three K’s by Lynch in the top of the second brought the potent lineup for the U-19 squad back to the plate. A leadoff walk to Lynch followed by a single from Kelli Godin (Seal Beach, Calif.)  put runners on the corners for Wallace, who hit a sac fly to left field to plate a run. Another sac fly by Echols extended the lead to six runs.

Both sides were retired without scoring until the bottom of the fourth inning when the U-19 team added three to their column of the scoreboard courtesy of a three-run blast from Kassidy Krupit (Suwanee, Ga.).

Holding a nine-run lead, Turner entered the circle in the top of the fifth inning and the defense behind her retired the side in order, ending the game via the run-rule.

Trailing by one run through the first five innings of play, the U-19 offense came alive in the sixth inning to propel the team to a 7-1 win over Chinese Taipei. With two on and two outs, Taylor Pleasants (Houston, Texas) drove in a pair of runs to put the U.S. up for good.

U.S. starter Montana Fouts (Grayson, Ky.) kept Chinese Taipei off the board through the first two innings of play until a two-out double and single drove in the first run of the game. The U.S. looked to respond in the top of the fourth inning by loading the bases, but a double play and grounder ended the at-bat with no runs crossing the plate.

That did not last long, however, as back-to-back singles by Coleman and Jadelyn Allchin (Fountain Valley, Calif.) put two on base with two outs. Pleasants stepped into the batter’s box and delivered the two-run double to left field, putting the U.S. ahead by one run.

Megan Faraimo (Vista, Calif.), who had entered the circle in the bottom of the fifth inning, kept Chinese Taipei off the scoreboard in the bottom of the sixth to bring Team USA back to the plate. Singles by Godin and Wallace quickly put two on and a sac fly from Echols added another run to the lead. Three more runs would cross the plate after a single from Jasmine Sievers (Laguna Niguel, Calif.), a squeeze bunt from Coleman and a two-run home run off the bat of Allchin.

With Chinese Taipei in their final at-bat, an error and single allowed two runners to get on base with two outs, but a strikeout ended the contest with the U-19 team earning the 7-1 win.

Faraimo picked up the win in the circle, striking out three while allowing just two hits in her two and one-third innings of work. Fouts struck out three in her four and two-third innings. Offensively, Allchin and Pleasants each picked up two RBI.

Two home runs fueled the WNT to an 8-1 win over the Philippines in their first outing at the USA Softball International Cup. Plating four runs in the top of the second inning, three runs in the fifth and a run in the sixth showed the relentless mentality of the U.S. offense, who combined for nine hits.

Shelby Pendley (Rio Rancho, N.M.) got the offense rolling in the top of the second inning by driving in Kelsey Stewart (Wichita, Kan.) who led off the inning with a double. A hit batter and single loaded the bases for Kirsti Merritt (Lake Panasoffkee, Fla.), who doubled on a line drive to right field to drive in two.

The Philippines tacked on a run of their own in the bottom of the frame. After a one-out double and chopper to right field gave the runner time to score from second, the lead was cut to 3-1 for Team USA.

Holding that lead through the fourth inning, a three-run shot from Dejah Mulipola (Garden Grove, Calif.) put the U.S. up 7-1. The final runs of the contest came in the top of the sixth after Valerie Arioto (Pleasanton, Calif.) hit a solo home run, making it an 8-1, U.S. ballgame.

Ricketts earned the ‘W’, dealing nine strikeouts with just two hits allowed in five innings of work. Carda finished with three strikeouts and one hit allowed. Offensively, Merritt and Mulipola each picked up three RBI with Pendley going a perfect 2-for-2.

An 11-hit outing at the plate by the Red, White and Blue helped the WNT to a 7-0 win over Scrap Yard Fast Pitch.  It was a team effort as 10 batters recorded a hit in the contest while five batters notched an RBI in the win.

Capitalizing on a bases-loaded situation, the U.S. plated the first runs of the contest in the top of the third inning. A two out single by Ali Aguilar (Orangevale, Calif.) and back-to-back walks to Arioto and Rachel Garcia (Palmdale, Calif.) put runners on each bag. Merritt stepped into the batter’s box as a pinch-hitter and delivered a bases-clearing double, the second of the day for the WNT, to drive in three runs.

An RBI double by Delaney Spaulding (Rancho Cucamonga, Calif.) in the fifth drove in Jazmyn Jackson (San Jose, Calif.), who entered as a pinch runner for Garcia who had singled earlier in the inning. Another two runs crossed the plate for Team USA in the top of the sixth, extending the lead to 6-0.

Sahvanna Jaquish (Highland, Calif.) led off the top of the seventh with a shot that bounced off the top of the centerfield fence but stayed in for a double. Two batters later, Haylie McCleney (Morris, Ala.) hit a sac fly to left field to plate Jaquish, making it 7-0, Team USA.

Garcia entered the circle for the final frame and picked up where Abbott left off. A strikeout, fly ball and grounder recorded the final outs of the game and sealed the 7-0 win.

Abbott finished the evening with 11 strikeouts, limiting Scrap Yard to just three hits through six innings in the circle. At the plate, Merritt picked up three RBI.

A total of 20 runs crossed the plate for Puerto Rico as the team picked up a pair of wins on their first day of the USA Softball International Cup. Taran Alvelo and Meghan King combined for 11 strikeouts in a 15-0 win over Peru while the scoring continued in a 5-1 win over Chinese Taipei.