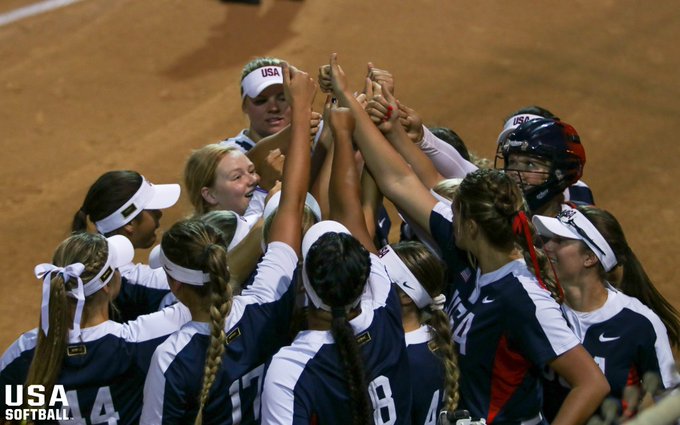 Photo and Image from USA Softball

IRVINE, California – The U-19 Women’s National Team (WNT) defeated No. 4 Puerto Rico 6-0 at the World Baseball Softball Confederation (WBSC) U-19 Women’s Softball World Cup. The win marks the fifth shutout of the World Cup for Team USA as they are a perfect 5-0 through five days of competition.

Montana Fouts (Grayson, Ky.) got her second start of the World Cup for the Red, White and Blue tossing 11 strikeouts and giving up just one hit in six innings of work. Rylee Trlicek (Hallettsville, Texas) finished off the final three batters in order for the U.S. with one strikeout.

Puerto Rico was able to secure the first hit allowed by Team USA in five games in the first inning but that was the only baserunner to make it on all night as the defense was perfect for the U.S..

Team USA jumped on the board in the bottom of the first inning when Charla Echols (Newnan, Ga.) hit a deep fly ball to center field to score Skylar Wallace (Woodstock, Ga.) from second. The U.S. didn’t score in the second inning, but the duo would strike again in the third, this time on a ground ball from Echols to center field to score Wallace. Echols went 2-for-4 at the plate with a single, triple and three RBIs to tie for the lead in the tournament with 10 total RBIs.

Team USA pushed another run across in the fourth with a single from Macy Simmons (Chandler, Ariz.) followed by a double to center field by Kelley Lynch (Newnan, Ga.) to score pinch runner Jadelyn, Allchin (Fountain Valley, Calif.) and give the Eagles a 3-0 lead. Another run would cross in the fifth on a ground ball by Bailey Dowling (St. Joseph, Ill.).

Echols would strike again in the sixth, this time for a triple down the right field line to score Wallace who was pinch running for Simmons who was 2-for-2 at the plate today. Jasmine Sievers (Laguna Niguel, Calif.) was 2-for-3 and scored the final run on a double to center field to make it a 6-0 lead for the Red, White and Blue.

“The team did a really good job of sticking with each other and finally breaking it open a little bit more in the last inning,” said U-19 WNT Head Coach Heather Tarr (Redmond, Wash./Head Coach at Washington). “We scored in all but one inning and that shows a lot about our team’s ability to stick with it and go play great defense and then come back again.”

As the NGB for the sport of softball, USAS is responsible for training, equipping and promoting the six USA Softball National Teams that compete in events such as the Olympics, Pan American Games, World Championships and other international and domestic events. For more information on USAS, including its founding and history as the Amateur Softball Association of America (ASA), please visit, www.USASoftball.com