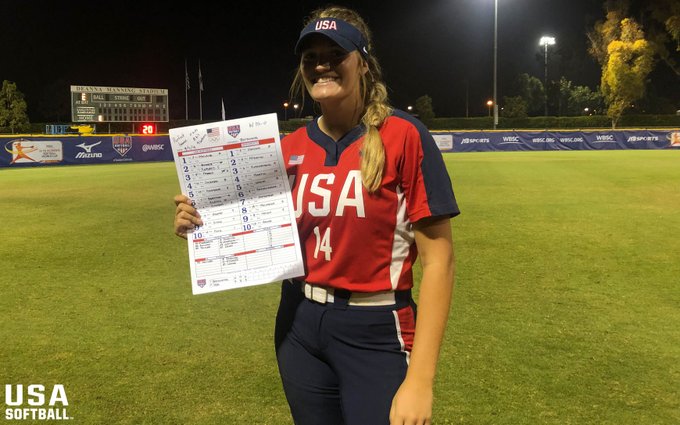 IRVINE, California – The U-19 Women’s National Team (WNT) put on an offensive showcase in route to a 15-0 victory over Botswana in three innings for the team’s second victory at the World Baseball Softball Classic (WBSC) U-19 Women’s Softball World Cup and Montana Fouts (Grayson, Ky.) was lights out in the circle for Team USA tossing the second straight perfect game for The U.S..

Charla Echols (Newnan, Ga.) started the scoring for Team USA in the first inning with a two-run home run to give The Eagles an early 2-0 lead. A string of singles from Team USA and doubles from Skylar Wallace (Woodstock, Ga.) and Bailey Dowling (St. joseph, Ill.) gave The U.S. a 9-0 lead in the first inning.

“I think that was a good thing for our team to get ahead and give our pitcher an early lead,” Echols said. “I’m glad that we could do that for our pitcher right at the beginning.”

A monster three-run home run from pinch hitter Lexi Kilfoyl (Land O’Lakes, Fla.) in the second inning gave The U.S. a 12-0 lead. Team USA had 14 hits in the game, six of which went for extra bases.

“When I stepped in the box I just tried to stay calm, put the ball in play and do what I know how to do,” Kilfoyl said. “It just so happened to be a home run so that was good to help save the pitcher to get her out of the game earlier.”

Fouts threw six straight strikeouts in the first and second inning to keep Botswana off the base path. The U.S. would push across two more runs in the third inning to secure the three-inning run rule victory.

Fouts was perfect through all three innings of work registering eight strikeouts and retiring all nine batters in order. Twenty of Team USA’s 21 total outs at the 2019 WBSC U-19 World Cup have come via strikeout with Megan Faraimo (Vista, Calif.) tossing a 12-strikeout perfect game in Team USA’s four inning victory over Mexico to open the tournament.

“I think it just really helps our offense get in there quicker,” Fouts said of the back-to-back perfect performances. “It keeps us on a roll and having shutdown innings.”

Team USA will be back in action on August 12 at 8 p.m. PT / 10 p.m. CT against No. 15 Czech Republic in their third pool play matchup of the tournament. A win against Czech Republic would secure The U.S. a top seeded spot in the Super Round which begins on August 13.