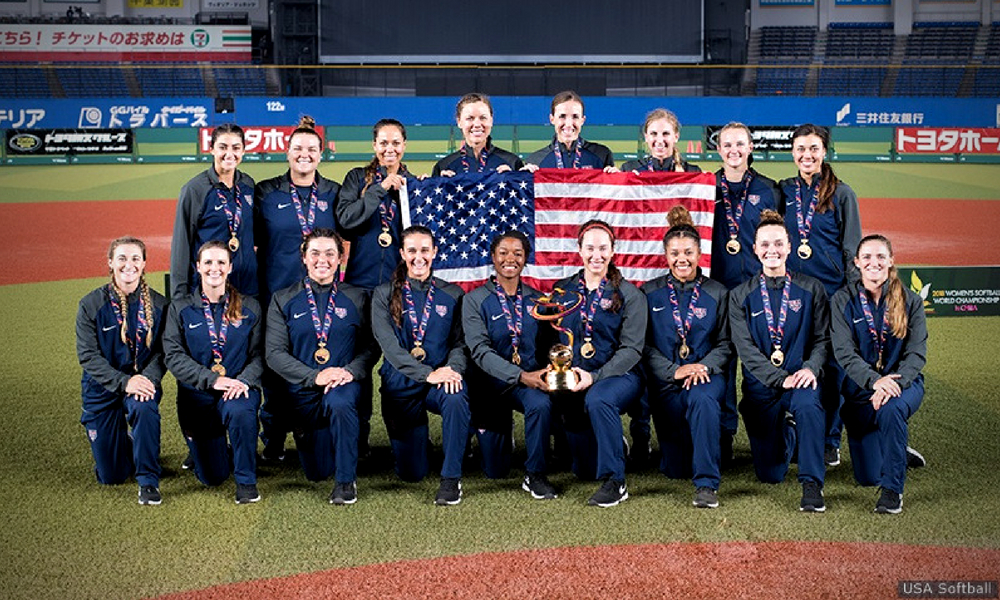 The United States won a dramatic come from behind victory over Japan on a Kelsey Stewart walk-off RBI single to drive home Michelle Moultrie in the bottom of the 10th inning to give the U.S. a 7-6 win over Japan to win the World Championships.

The United States clinched a spot into the 2020 Summer Olympics earlier when Japan defeated Canada 3-0 to advance to the Gold Medal game. Japan’s win over Canada meant that the U.S. would get the automatic bid into the Summer Olympics since Japan already had a spot as the host country. It was the second walk-off victory over Japan in 24 hours as Rachel Garcia hit a walk-off single in the bottom of the eighth to send the United States to the Gold Medal game with a 4-3 win the day before.

In the gold medal game, Japan struck first in the second inning after plating a run off a RBI single by Haruka Agatsuma. In the third inning, Japan’s Saki Yamazaki singled with two outs before crossing home on an RBI triple by Yu Yamamoto. Trailing 2-0, Team USA answered back in the bottom half with a two-out three-run shot by  Delaney Spaulding to make it 3-2 in favor of the Amercian squad.

Kelly Barnhill came in, in relief of Keilani Ricketts in the fourth inning who forced a three-up, three-down inning, while Japan’s Yukiko Ueno continued to do work and retire the U.S. side.

With one out in the top of the fifth, Danielle O’Toole (Upland, Calif.) entered the circle. Japan’s Eri Yamada singled and advanced to second on a sacrifice bunt before a walk put two runners on. Rachel Garcia (Palmdale, Calif.) came in to pitch and despite a walk loading the bases, a strikeout ended the threat. Haylie McCleney (Morris, Ala.) singled, and Valerie Arioto (Pleasanton, Calif.) drew a two-out walk in the bottom half, but the two were left stranded after a strikeout closed out the inning.

Japan’s Yamato Fujita made it a tie ballgame in the sixth after leading off with a home run over the centerfield fence, while a pair of strikeouts and a pop out retired the U.S. side.

With the international tie-breaker (ITB) rule in effect, a sacrifice bunt would move the runner to third before Japan’s Misato Kawano singled home Mana Atsumi to put Japan in the lead, 4-3. The fight and resiliency of Team USA continued to show after a fielder’s choice moved Ali Aguilar to third before they tied the game on an RBI single from Moultrie.

Monica Abbott entered the game in relief to start the ninth, and despite loading the bases after a pair of two-out walks, a groundout to Arioto got Abbott out of trouble.

Japan’s Yu Fujita would send a two-run shot past right field to give Japan a 6-4 lead in the top of 10th, Team USA responded, Aguilar quickly took third on a groundout before coming home on an RBI single from Spaulding. A single from Moultrie put runners on the corners while a ground-rule double from Munro scored the tying run. With the winning run on third, Stewart laced one down the third base line to bring home Moultrie and clinch the World Championship.

USA’s pitching staff of Abbott, Barnhill,  Garcia, O’Toole, and Ricketts performed well in the circle, with Abbott earning the win after striking out two, walking two and allowing one hit in her two innings of work. McCleney, Moultrie, and Spaulding led the offense with two hits apiece, with Spaulding collecting four RBI’s including her three-run home run.

The USA wins Gold going 10-0 in Tournament, the Only team not to lose a game. Japan finished second, while Canada gets the bronze medal in and Australia ends fourth.

The United States and Japan are now part of the six-team field at the 2020 Summer Olympics in Tokyo, Japan. The remaining four spots will be decided next year in the following tournaments.

The Americas Olympic qualifier will be a maximum 16-team tournament, with the winner and the second place nation advancing to Tokyo 2020. Eligible countries to compete in this Qualifier will be based on the finals standings of the 2019 Pan American Championship.