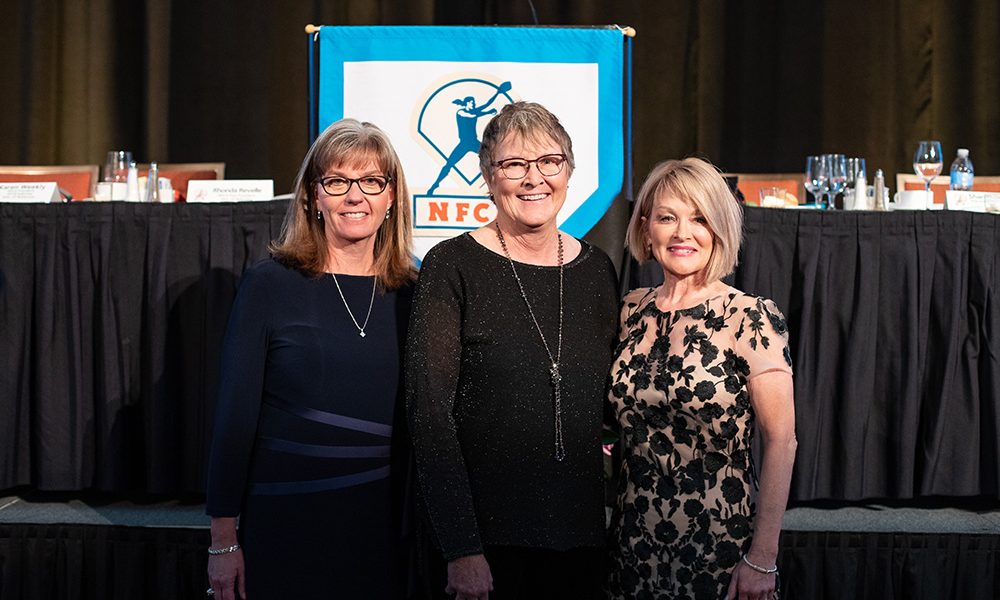 This weekend at the 2018 NFCA Convention held in Chicago, IL. three softball legends were inducted into the NFCA Hall of Fame. Below is the official release provided via Brian Stanley, NFCA Director of Communications (brian@nfca.org).

At the NFCA Convention’s marquee event, the trio of coaches enter as the association’s 28th Hall of Fame Class. The induction of Knight, Lambros and Weekly brings the Hall’s membership to 80. Sharon Lambros, wife of the Mike Lambros, accepted on his behalf. He is the first high school member and the first posthumous induction into the NFCA Hall of Fame.

Salisbury has won 19 Capital Athletic Conference championships, been in the NCAA tournament 20 times, and advanced to the NCAA championship on nine occasions in Knight’s tenure. She has been named the CAC’s Coach of the Year 15 times and her coaching staff has garnered 10 NFCA Regional Coaching Staff of the Year accolades.

Knight also coached the Salisbury volleyball team from 1997 through 2012, winning eight CAC championships and leading the program to the NCAA tournament eight times, including a trip to the NCAA championship weekend in 2012.

Prior to joining the Salisbury coaching ranks, Knight spent 13 years at North Caroline High School (Ridgely, Md.) coaching softball and volleyball, where she won state championships in both sports, winning softball titles in 1988 and 1991. She put together a record of 392-77 in the two sports.

A former Sea Gull student-athlete, Knight was inducted into the Salisbury University Athletics Hall of Fame, for her play on the softball, basketball, and volleyball teams, in 1995.

Lambros, the winningest high school softball coach in North Carolina history, guided North Davidson High School (Lexington, N.C.) to an 878-110 record over 38 years, including 32 conference championships, eight regional titles and two 4A state crowns. Taking over the slowpitch program in 1980 at the age of 25, Lambros, who is the Association’s first high school inductee, led the Knights to 17 state final fours and seven state runner-up finishes.

Lambros passed away on September 29, 2017, after a 14-month battle with pancreatic cancer. Just months earlier in June, Lambros and the Black Knights won the NCHSAA Class 4-A state softball championship, going 29-5 and sweeping a best-of-three series against Cape Fear High School. The team donned jerseys with Lambros’ name on the back. North Davidson won its first state crown in 2010 as the Black Knights recorded a perfect 33-0 mark.

Known for his phrase “Yeah, baby,” Lambros conducted a Yeah Baby Softball Camp which taught softball skills to players age five and up for more than 20 years. He was inducted into the North Carolina Softball Coaches Association Hall of Fame in 2010, joined the Davidson County Sports Hall of Fame in 2012, and was named the North Carolina High School Athletic Association Harvey Reid Male Coach of the Year in 2013.

In 2016, North Davidson named the softball field in his honor. Additionally, that year, he received the Order of the Long Leaf Pine, which is one of the highest civilian honors given in North Carolina. The award is for exemplary service in the state and its communities in which the person has made a significant impact and strengthened the state.

Having served as co-head coach of the Tennessee program since 2002, Weekly has compiled an impressive record of 850-259-2 (.765) despite competing in one of the nation’s strongest softball conference–all 13 SEC teams made the 2017 and 2018 NCAA Tournament fields. The Lady Vols have averaged more than 47 wins per season over the last six years.

Weekly is a member of the 1,000-win club, reaching the milestone on March 22, 2017 following a 9-2 win over North Carolina. At the time, she was the 33rd head in NCAA Division I history to accomplish that feat. Coaching the USA National Team to a gold medal, she was an assistant on the US Women’s Senior National Team that won gold medals in the Mayor’s Cup and the Pan American games in 2013.

Under Weekly’s leadership, Tennessee was the first SEC team to reach No. 1 in the polls and reach the WCWS Championship Series (both in 2007).  Weekly has produced 76 All-SEC or SEC All-Freshman selections, 35 NFCA All-America honorees, five SEC Players of the Year, four SEC Freshmen of the Year, three SEC Pitchers of the Year and 64 NFCA All-Region selections. Academic highlights during her tenure include a remarkable 22 CoSIDA/Google Cloud Academic All-American selections.