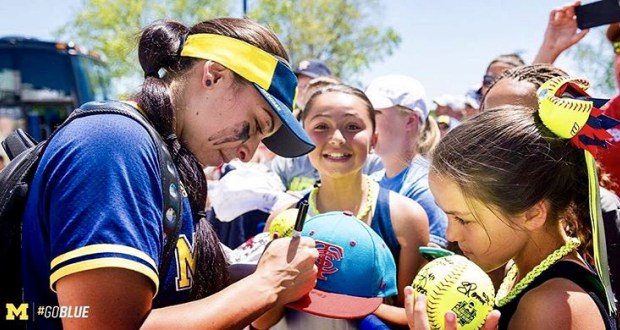 Every single softball player in the world has looked up to another softball player at some point in their career. Their own softball role model. There’s a reason why some of us got the burning desire to become a pitcher when we first watched Jennie Finch take the circle for the University of Arizona. Or why some of us decided to give power hitting a try when we saw Crystl Bustos set the Olympic home run record. Don’t get me started on Stacey Nuveman and her catching abilities behind the plate for Team USA and the UCLA Bruins.

Softball players serve as role models without even realizing it. No matter what team, school, or name you wear on your jersey, there is always a little girl in the stands who wishes she was playing in your shoes. Not sure if you have what it takes to be a role model? Let’s define it.

What a positive softball role model may look like:

The list could go on and on. Think about someone who you look up to, what do you admire about them? Why do you choose to look up to them? Aren’t sure you have what it takes to be a role model to someone? Try some of the things in the bulleted list above, or think back to those reasons of why you look up to someone else. Our role models do all of the little things right, that’s why they are good at what they do. In our eyes, they have perfected their craft. In order to be like them, we have to practice doing the little things right. Also keep in mind, there could be a little girl in the stands who wants to be just like you someday, don’t disappoint her.