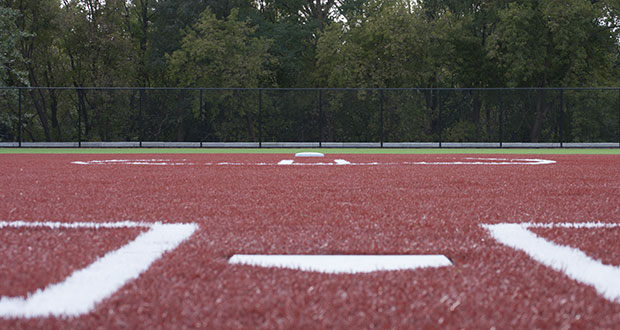 Have you ever heard of the River when it comes to pitching? Well even if you’re not a pitcher, you can still benefit from reading this article. The River runs between each edge of the plate and connects to the white chalk line of the batter’s box on each side. The width of the River is approximately two balls wide and it is a hitter’s worst nightmare.

Once pitchers learn about the River, it’s important to educate the catcher behind the plate about the River. Would you believe me if I told you that pitchers can get away with throwing strikes that never touch the plate? That’s a scary thought for any hitter out there, especially those who can’t reach an outside pitch with their bat, to begin with.

How could a pitcher and catcher possibly get away with this strategy, you ask? It takes time, practice, and cooperation from the umpire behind the plate. It may take the umpire a few pitches or even innings, to call a pitch one-ball-off the plate a strike. If a pitcher consistently hits the target on or close to that spot, the umpire may expand the zone. Pitcher’s, you are in charge out there. You not only control the pace of the game but also the strike zone as the game goes on. Why throw it over the plate when you really don’t have to?

The best way to practice throwing consistently into the River is by adding lines near the plate to pitching workouts. The line serves as a reference point to the new Powerline. An actual line is helpful so the pitcher can visualize the spot as well as be able to line her front toe up with the spot mid-pitch. It’s also a great tool for catchers to gauge where the pitch crosses the River.

One-ball-off should receive the most attention in practice because it will be used the most in a game situation. The only time pitchers should throw to a two-balls-off the plate target is when they are ahead in the count 0-2 or 1-2. Every other count should be a one-ball-off pitch. If the count becomes 3-2 and the umpire isn’t as lenient in the River, that is the only time the pitcher should inch the pitch closer to being on the corner of the plate.

Using the River and being consistent with spotting pitches in the River is an advanced approach to pitching. This tactic is used by many college pitchers as well as Professionals. If they can be successful throwing into the River, so can you. The River is a pitcher’s best friend and a hitter’s worst nightmare, take advantage of it and put it to work!