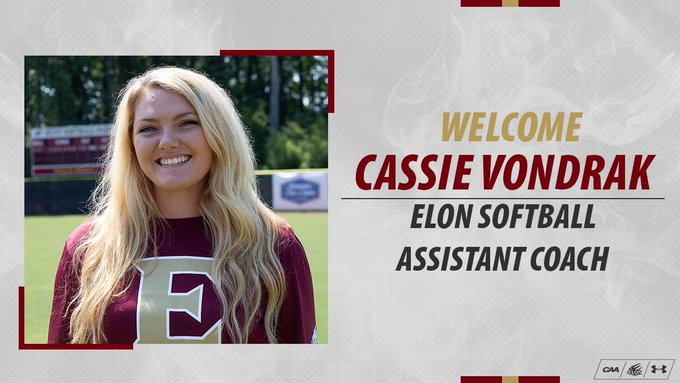 “I am very excited to add Cassie to our coaching staff,” said Bocock. “I am also very pleased to announce Mallory’s promotion into the associate head coach position. Our coaching staff is looking forward to the players arriving on campus this weekend so that we can get started on building another great year.”

Vondrak arrives after spending the last five seasons as the pitching coach at Columbia University. During her time at Columbia, she helped the program post back-to-back winning seasons the past two years including the Lions’ first Ivy League postseason berth in 2019. Vondrak was also instrumental in coaching an All-Ivy league selection in 2017 and in 2019.

As a student-athlete, Vondrak spent three seasons as a member of the LIU-Brooklyn softball team. She pitched in three Northeast Conference (NEC) title games for the Blackbirds, helping the squad to the 2012 NEC Championship and earning Tournament MVP honors in the process. A three-time All-NEC Tournament team selection on the field, Vondrak also shined in the classroom where she was a member of the Dean’s List, NEC Athletic Academic Honor Roll and the Chi Alpha Sigma National College Athlete Honor Society.

“Excited about Cassie joining our program and the Elon softball family,” said Bocock. “She brings great energy and loves to teach the game. She will be a great addition to our coaching staff and continue to help build what we accomplished from this past season with our pitching staff.”

Over her two seasons at Elon, Borden has made an immediate impact with the Phoenix working primarily with the hitters and infielders. This past year, Borden was instrumental in assisting the Phoenix to lead the Colonial Athletic Association in doubles per game and finishing fourth in the nation overall with 1.76. Borden’s tutelage was also instrumental for Megan White to earn Colonial Athletic Association Co-Rookie of the Year accolades as Elon reached the CAA title game for the first time this past season and also helped Hannah Olson earn the CAA Defensive Player of the Year in 2018.

“Coach Borden has done a tremendous job for us on the hitting and defensive side,” said Bocock. “The players love her and have a lot of respect for her and have bought in to what she has taught them. She has definitely earned her promotion to associate head coach.”

The addition of Vondrak and promotion of Borden helps fill in the void on Bocock’s staff after the departure of longtime associate head coach Jess Jacobson to UConn last month. Jacobson spent nine seasons as assistant at Elon including eight as the associate head and pitching coach under Bocock.

“I want to thank Jess for her contributions to our program over her nine seasons at Elon,” said Bocock. “I’m so happy for her and her family with her new beginnings at UConn and I’m sure she will do a great job for that program.”