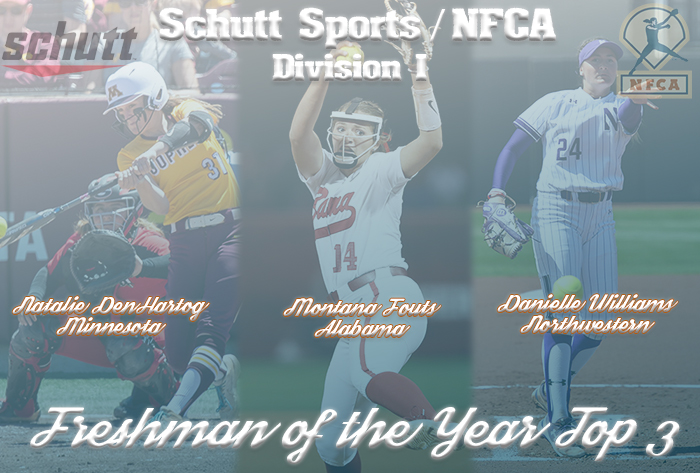 FOR IMMEDIATE RELEASE- May 21, 2018
DenHartog, Fouts, Williams finalists for 2019 Schutt Sports / NFCA Division I National Freshman of the Year

LOUISVILLE, Ky. – Minnesota’s Natalie DenHartog, Alabama’s Montana Fouts and Northwestern’s Danielle Williams are the three
finalists for the 2019 Schutt Sports / NFCA Division I National Freshman of the Year award. The winner will be announced on the evening of May 28 at the 2019 NCAA Women’s College World Series banquet in Oklahoma City.

Fouts is the seventh top-three finalist to represent the Southeastern Conference and the second from Alabama. DenHartog is the second Golden Gopher, while Williams is the first to don a Wildcat jersey as the duo doubled the Big Ten’s number of finalists to four.

An NFCA All-Great Lakes First Teamer, DenHartog leads the Big Ten with 59 RBI, which is ranked 11 th in the NCAA. She is batting .392 with 15 doubles two triples and 16 home runs through 56 games and is one of the keys to Minnesota’s second Super Regional appearance in program history. The Gopher cleanup hitter has a team-leading .830 slugging percentage and 127 total bases. Three of the Hopkins, Minn. native’s 16 long balls have been grand slams. She earned unanimous All-Big Ten First Team and All-Freshman Team honors.

Fouts, the SEC Freshman of the Year and first-team all-conference selection, is 14-3 this season with a 1.20 ERA, which is second lowest in the SEC and ranks 14 th nationally. She has struck out 164 batters over 146 innings, twirled five shutouts, picked up five saves and is holding her opposition to a .167 batting average. Named to the NFCA’s All-South Region First Team. The rookie hurler has picked up victories over nationally-ranked opponents, Arizona, Georgia, Florida and two against Minnesota. Fouts, a native of Grayson, Ky., earned five weekly honors from the SEC, including a program-record four Freshman of the Week accolades.

Williams led the Big Ten this season with 31 wins and 13 shutouts, ranking tied for third and fourth in the nation, respectively, It is the most victories and shutouts for a Northwestern pitcher in her rookie season since 1984. Williams, the first Big Ten Freshman of the Year since 2004, is also ranked among the top 10 in the nation with 310 strikeouts (6 th ) and 9.7 strikeouts per seven innings (9th), while posting a 1.38 ERA with just 39 walks and a .161 batting average against. The rookie southpaw has played a pivotal role in Northwestern’s first Super Regional appearance since 2008. Williams, a native of Pleasanton, Calif., earned first team NFCA All-Great Lakes Region accolades.

In its sixth year, the Schutt Sports / NFCA Division I National Freshman of the Year award was created to honor outstanding athletic achievement among Division I freshmen softball student-athletes. The top three and the winner are voted on by the NFCA’s Division I All-American Committee, consisting of one head coach from each of the Association’s 10 regions.