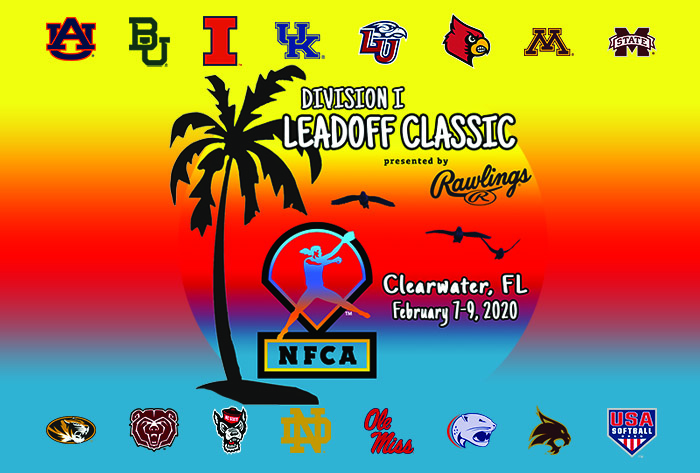 LOUISVILLE, Ky. –The NFCA Division I Leadoff Classic is back! Presented by Rawlings, the 19th version of the Association’s season-opening tournament will take place Feb. 7-9 at the Eddie C. Moore Complex in Clearwater, Fla. The 2020 field will feature 15 collegiate programs, 10 of which participated in the 2019 postseason, and the United States Women’s National Team.

“I can’t think of a better way to kick off the 2020 season than to head to Clearwater, Fla. for our NFCA Division I Leadoff Classic!” said Executive Director Carol Bruggeman. “Our tournament will give fans the first opportunity to see some of the best teams in the country and the US National Team all in one place. Our Division I coaches have been asking the NFCA to ‘bring back’ this tournament for the last two years and we are honored to make it happen. The NFCA would like to thank official convention sponsor USA Softball, longtime NFCA partner, the City of Clearwater, and Rawlings for their support of this prestigious event.”

Highlighting the field is 2019 Women’s College World Series participant Minnesota, along with Kentucky and Ole Miss, who reached the Super Regionals. Missouri and Louisville were regional finalists, while Auburn, Illinois, Mississippi State and Notre Dame qualified for regionals. The final postseason team from 2019 is Liberty, which took part in the Championship round of the NISC.

Each team will play a total of five games over three days. Click HERE for a complete schedule.

A special addition to the field is Team USA. The Red, White and Blue will be gearing up for the 2020 Olympics and take on five programs over the three days. The World No. 1 will match up in exhibition contests against Mississippi State, Illinois, Baylor, Kentucky and Texas State. A pair of National Team pitchers – Keilani Ricketts and Cat Osterman – have ties to the Bulldogs and Bobcats, respectively.  Ricketts is the younger sister of Mississippi State head coach Samantha, while Osterman is Texas State’s pitching coach.

“We’re excited to be participating at the 2020 NFCA Leadoff Classic,” said USA Softball Chief Executive Officer (CEO), Craig Cress. “It’s important for our National Team to face quality competition in their training for the Tokyo 2020 Olympic Games, and participating in events such as this will help our team prepare. We look forward to competing in this prestigious event and sharing in the excitement of softball’s return to the Olympic Games.”

In addition, Liberty head coach Dot Richardson was a member of the 1996 team that won the first-ever Olympic Gold Medal in softball. Coincidentally, 1996 was the first year the NFCA hosted the Leadoff Classic in Columbus, Ga., the competition site for softball at the Atlanta Olympic Games. The Washington Huskies were crowned winners of the inaugural tournament.

Following a five-year hiatus, the Division I Classic makes its return to Clearwater, the site of the final three from 2012-14. The first 15 tournaments were held in Columbus, Ga. from 1996 through 2010. One team in this year’s field, Notre Dame, participated in the first-ever Leadoff Classic, while another, Illinois, captured the 2010 title, the last time it was held in Columbus.

Michigan has captured the most titles with four, while Louisiana, Stanford and Washington each came out on top twice.

Tickets for the event will go on sale Aug. 27 and be available for purchase on NFCA.org.

Rawlings, the title sponsor of the 2020 Division I Leadoff Classic, will also be an on-site vendor.

“There’s no better way to kick off the plans we have in store for Rawlings Softball than this opportunity to partner with the NFCA and a premier tournament,” said Chelsea Stinson, Rawlings Sports Marketing, Softball. “We’re committed to softball and aligning ourselves with organizations and events that align with our vision for the sport.”

This tournament begins a stretch of five NFCA Leadoff Classics in 2020. In addition to Division I, NAIA (Feb. 28-March 2- Columbus, Ga.) and NCAA Division III (March 6-8 – Tucson, Ariz.) will hold their respective collegiate tournaments, while a pair of high school Classics return for a second year in Bryan/College Station, Texas (Feb. 20-22) and Newark, N.J. (April 4-5).