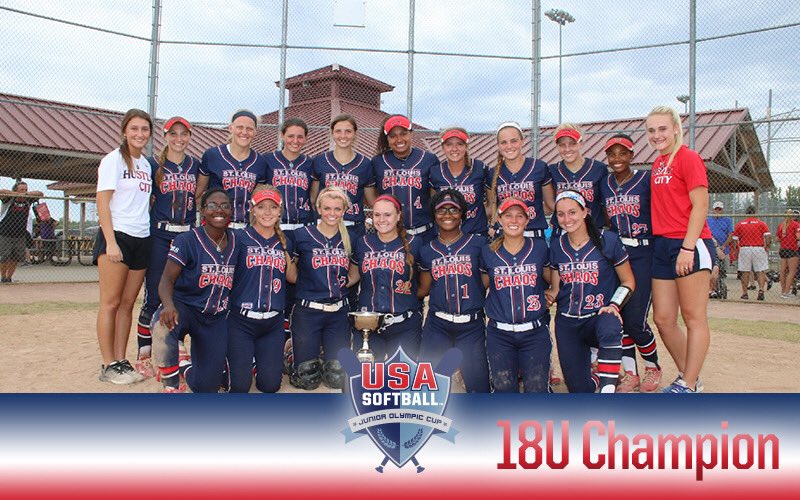 With both teams hungry for a spot in the championship game, a late run gave the St. Louis Chaos the win. The Chaos kept their composure after an upset on Friday night by the Glory. Splitting the game in the circle were Meghan Schorman and Emma Nichols both pitched three innings. Schorman gave up eight hits and one walk in her outing before Nichols shut it down in relief. Nichols only gave up three hits and walked just one. Trailing by one heading into the final inning, the Chaos came back for the win.

Olivia Ward had a lead-off single to start then stole second shortly after. Now with two outs, Chelsy Pena hits an RBI single to left to tie the game 3-3. Next, Rylea Smith does her job with an RBI single to center to take the lead 4-3. Finally, an RBI double by Makayla Hurst to right field pushed across a third run which was enough to secure the win and advance to the championship game.

With an outstanding comeback from the loser’s bracket by the Glory, they forced the “if” game on Saturday morning by defeating the Chaos Friday night. Mya Stevenson completed an inning on the rubber before Sophie Hannabas took the last six. Hannabas had five strikeouts but allowed seven hits. The got their bats warmed up in the third and tied 2-2. In the fourth, the Glory took their first lead of the game after an RBI single by Ashleigh Sgambelluri to make it 3-2. Unfortunately, that was the end of the Glory scoring streak, and they couldn’t come back from a seventh-inning rally by the Chaos.

Both the Ohio Hawks and the St. Louis Chaos impressed all week. Ultimately a pitching duel would determine the 2018 18U JO Cup championship. Emma Nichols took the circle for the Chaos and threw all seven innings. Of the 103 pitches thrown, she posted five strikeouts, four walks, and gave up three hits. With both teams scoreless until the sixth, The St. Louis Chaos decided to take the game into their own hands. A walk got a runner on to start the sixth. Nichols helped her cause with an RBI double to center making the score 1-0. With two outs Kelsey Lenox steps up to the plate and hits one to left to score another making it 2-0.

The Ohio Hawks bats were quiet, a highlight hit of the game was a double by Cameron Wesley. After being undefeated in bracket play, the Hawks couldn’t seem to get their bats going, Pitching for the Hawks was Emily Gant who like her counterpart went the distance. She racked up 123 pitches on the day striking out six. However, the seven hits and three walks allowed the Chaos to take advantage with their base runners. Gant had a hit for herself at the plate along with Sydney Larson and Cameron Wesley.