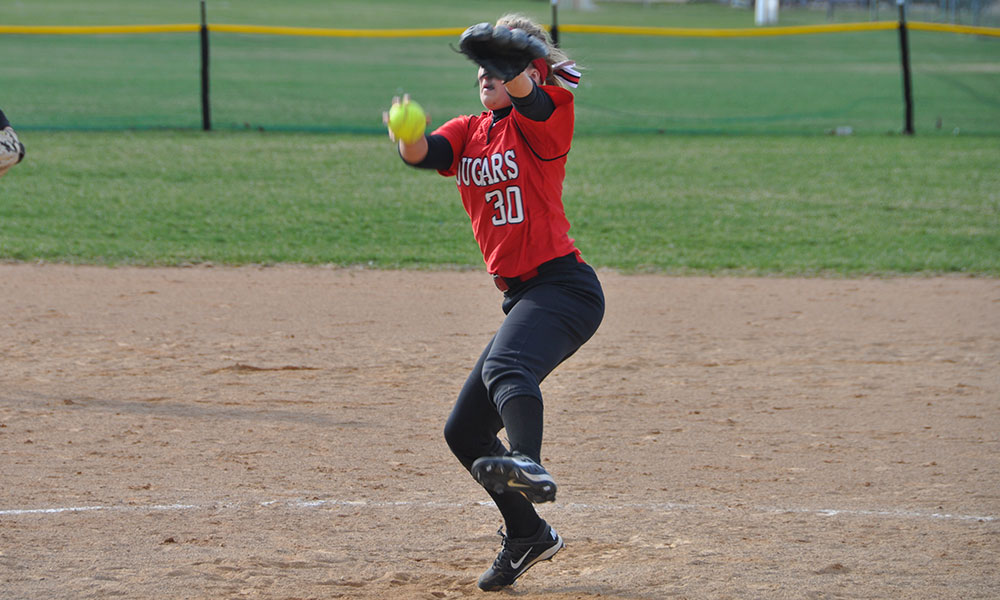 If you ask a softball pitcher “what’s one thing you want to get better at?” the most common answer will be to “increase speed” or to “throw harder”. Pitching speed and power comes mainly from the lower body. Legs are what provides pitchers with power due to the stride, resistance from the front landing leg, and from the back leg drag which finishes the pitch. Many pitching coaches focus mainly on the leg drive when it comes to increasing a pitcher’s speed. When only one area of the body is focused on, this can often time throw off a pitcher’s timing until her body gets used to the adjustments. This is totally normal. It’s also important to incorporate drills into a pitchers warm up or practice routine that will increase arm speed. Adding arm speed drills will help keep the mechanics and timing in sync.

An easy drill which can be incorporated into a pitcher’s warm up or practice regimen is kneeling arm circles. With the pitcher’s body in an open position, or belly button facing away from the catcher, place the throwing hand knee on the ground. Right-handed pitchers will kneel with their right knee down and left leg straight out towards the catcher. Have the pitchers front toe pointed the way their belly button is, away from the catcher ensuring the pitcher is in an open position. The purpose of being on a knee is to isolate the lower body. There will be no leg movement during the following drills, just the arm and the core will be doing the work.

Single kneeling arm circle: After getting set up in the arm circle position with the lower body isolated, have the pitcher point both her glove and the ball towards the catcher. The next movement in the single arm circle is to send both arms straight up, no back swing or momentum building in this first drill. Once both arms push up past the eyes, the pitcher will separate her hands, opening her belly button up away from the catcher, and from here she will enter the K position, then move down to the T, and the release point. The purpose of the single kneeling arm circle is to force the pitcher to generate her own arm speed. This will also help strengthen the arm and the pitcher’s whip.

Double kneeling arm circle: The same drill as above to begin. This time the pitcher will point the ball and the glove at the catcher, but instead of sending both arms up, this time a back swing is allowed to generate momentum. While keeping the glove pointing at the catcher, the pitcher will execute a controlled backswing before sending her throwing arm up and completing two arm circles. Start the first arm circle at a medium speed and the second faster than the first. By increasing speed on the second circle, this lengthens the arm which creates faster circles resulting in more arm speed and whip to finish the pitch.

Triple kneeling arm circle: The exact same as the double only this time the pitcher will add a third circle to the progression. Point both the ball and the glove at the catcher and add a backswing with the throwing arm to build momentum. This time as the arm travels around, have the pitcher produce each circle with a slow, then medium, then quick speed. The third circle should always be the fastest one. Control the pitch count on the triple arm circles, a pitcher doesn’t need to do 10 before a game, that would be 30 arm circles right off the back. Try this drill out in practice, maybe five of each before standing up and continuing the warm up or go right into the full pitch.