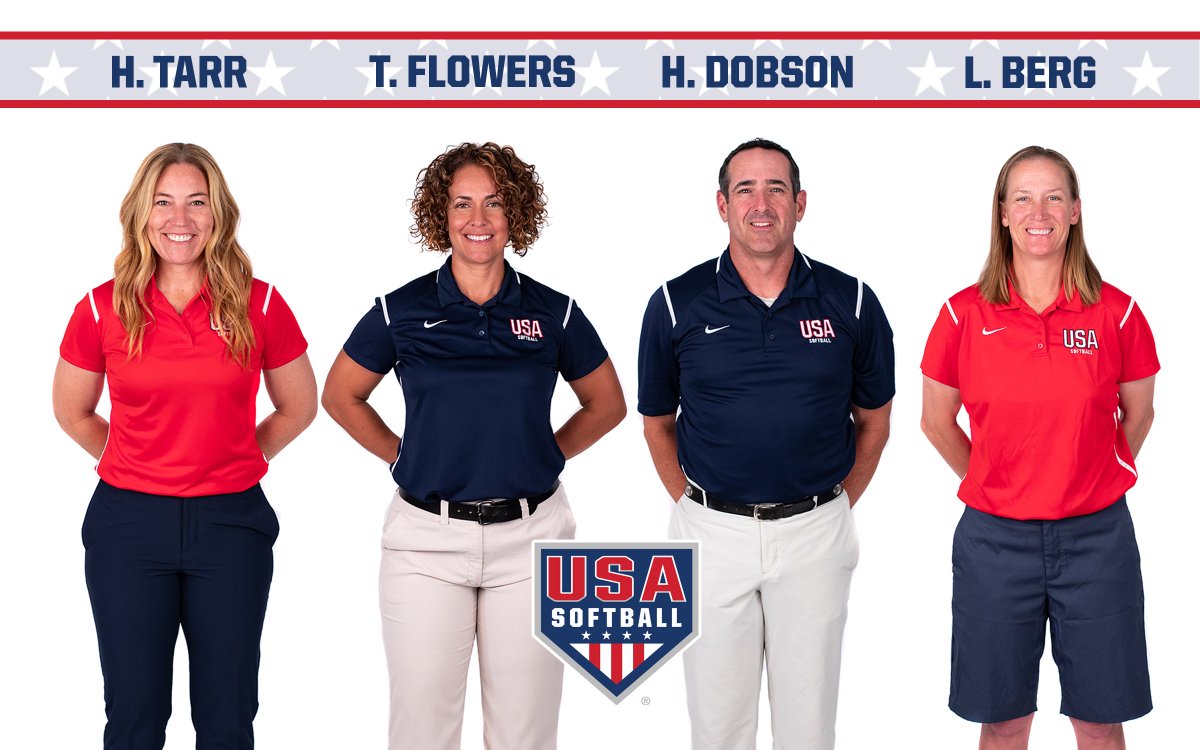 “Congratulations to all four coaches on this much-deserved selection as an Assistant Coach for our 2020 Women’s National Team,” said USA Softball Chief Executive Officer (CEO), Craig Cress. “Their qualifications alone speak volumes to their ability to lead and guide athletes in their journey to Gold. It’s also extremely special for us to have two Olympians on our coaching staff who can share invaluable experience and knowledge on what the members of the 2020 team can expect.”

“Team USA is in great hands with our coaching staff heading into the training season and into the ‘Stand Beside Her’ tour,” said WNT Head Coach, Ken Eriksen (Tampa, Fla/Head Coach at South Florida). “The addition of Assistant Coaches Laura Berg, Howard Dobson, Tairia Flowers, and Heather Tarr is a bonus for our athletes. Their combined knowledge, experience, and communication abilities is a tremendous asset for our team in its efforts to get better every day. With Olympic Games experiences amongst the staff, I feel very honored to have these four great people join us.”

Berg has been involved with USA Softball as both an athlete or coach since 1994. As a player, Berg is one of four women who hold three Olympic Gold Medals. Considered to be one of the greatest outfielders to ever play the game, Berg helped the United States to a Gold Medal at the 1996, 2000 and 2004 Olympic Games and also holds an Olympic Silver Medal from the 2008 Beijing Olympics. In addition to competing in four Olympic Games, the National Softball Hall of Fame member also played in four World Baseball Softball Confederation (WBSC) World Championships and three Pan American Championships, all of which were Gold Medal finishes.

Berg joined the WNT coaching staff in 2012 and has helped lead the Red, White and Blue to a WBSC World Championship Gold Medal (2018) and a Pan American Games Gold Medal (2019). Berg also has previous experience with the Junior Women’s National Team (JWNT) program, serving as the Head Coach for the 2017 JWNT that earned Gold at the WBSC Junior Women’s World Championship (JWWC) in Clearwater, Fla. and as an Assistant Coach for the 2013 JWNT that earned a Silver Medal at the WBSC JWWC in Brampton, Ontario, Canada.

“I’m so thankful for the opportunity to work with this incredible team and coaching staff,” said Berg.

Dobson is making his ninth appearance as an Assistant Coach for the WNT program after serving on the coaching staff since 2012. In his tenure with USA Softball, Dobson has contributed to two WBSC World Championship Gold Medal finishes in addition to a Gold Medal at the Lima 2019 Pan American Games.

At the collegiate level, Dobson has held an Assistant Coach position at LSU since June of 2011. Since taking the reins of the Tiger offense, Dobson has helped produce some of the most prolific hitting teams in program history.

“I am tremendously honored and humbled to be a part of the 2020 U.S. Olympic coaching staff,” said Dobson. “I look forward to helping the athletes achieve their goal of returning the Gold Medal back to where it belongs! I am very appreciative of the sacrifices my family, LSU Head Coach Beth Torina, and staff have made to allow me to pursue this endeavor. Thank you to the Selection Committee for the time and effort they have put in for making this dream a reality. I look forward to working with Head Coach Ken Eriksen and competing to be the best in the world!”

Flowers, a two-time Olympian, has been involved with USA Softball since 2001 as both a player and coach. As a player on the WNT, Flowers helped the United States to a perfect record and Gold Medal at the 2004 Athens Olympics, and to a Silver Medal at the 2008 Beijing Olympics. She also won Gold Medals at the 2002 and 2006 WBSC Women’s World Championships and the 2003 and 2007 Pan American Games.

Following the conclusion of her playing career, Flowers took her talents to the WNT coaching pool where she has served in a variety of roles since the 2011 season. She was a member of coaching staffs that led the WNT to the 2011 Guadalajara Pan American Games Gold Medal and 2019 Lima Pan American Games Gold Medal. Flowers also led the 2015 and 2013 JWNT programs that earned Gold and Silver at the WBSC JWWC, respectively.

“I am so thankful for this opportunity,” said Flowers. “I have been in this program for a long time, both as an athlete and coach, and have loved every second of it. We have an amazing group of people that surround us and it’s going to be a great ride.”

In 2017, Tarr joined the USA Softball program as an Assistant Coach for the WNT and helped guide the 2017 roster to a Gold Medal finish at the Pan American Championship in Santo Domingo, Dominican Republic. Returning to the coaching staff in 2018, Tarr once again had a Gold Medal season with the WNT who captured a Gold Medal at the WBSC World Championship. In 2019, Tarr served as the Head Coach for a history-making U-19 WNT that earned a Bronze Medal at the USA Softball International Cup, the first for a JWNT program, and a Gold Medal finish at the WBSC U-19 Women’s Softball World Cup.

As a player, Tarr was a four-year letter-winner at Washington. A part of Washington’s first team to reach the NCAA Women’s College World Series (WCWS), Tarr helped the Huskies earn a runner-up finish in 1996 and a third-place finish in 1997. In her four years, Tarr earned three Pac-12 All-Academic merits and was named First-Team All-Pac-12 three times.

“I am honored to be part of this coaching staff,” said Tarr. “The 2020 team has great chemistry and they are hungry for information. I am eager to continue the journey with USA Softball and see how good we can get in pursuit of the Gold Medal this coming July.”

*All nominations to the 2020 U.S. Olympic Team are pending approval of the United States Olympic & Paralympic Committee (USOPC)