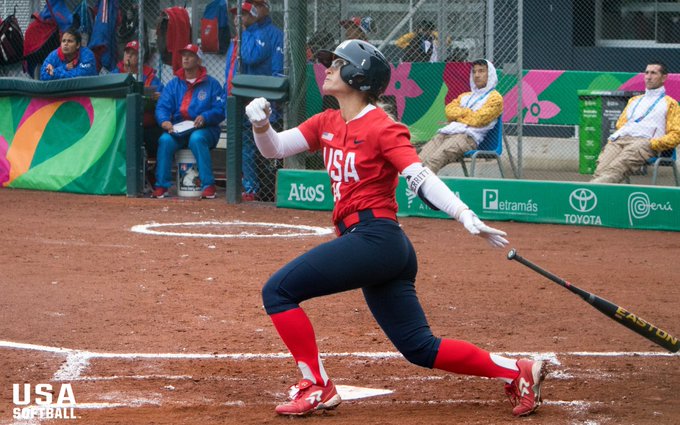 LIMA, Peru — The USA Softball Women’s National Team (WNT) moved to 2-0 at the Pan American Games with a 6-0 win over No. 4 Puerto Rico. Posting their second shutout in as many days, Haylie McCleney (Morris, Ala.) was a spark in the top of the lineup, going 3-for-3 with one walk while Cat Osterman (Houston, Texas) and Rachel Garcia (Palmdale, Calif.) teamed up for the shutout win in the circle.

“It’s pretty good for a team when you’re getting good pitching and timely hitting, and that’s what happening right now,” said WNT Head Coach, Ken Eriksen (Tampa, Fla./Head Coach at South Florida). “I like the way the players are observing the game and seeing what they can do to help the team win. Whether it’s dropping a bunt, moving a runner with a slap or making a defensive play. Whatever it takes.”

Osterman came out dealing in the top of the first, quickly retiring the first batter of the game with a strikeout before a single put a runner on base. A second strikeout kept the runner at bay until a walk put two on for Puerto Rico, but Osterman picked up her third strikeout to end the threat.

McCleney did her job as the leadoff batter, beating out an infield single and moved to second base on a single through the right side by Valerie Arioto (Pleasanton, Calif.). Back-to-back strikeouts halted the U.S. rally, however, keeping the game scoreless.

After retiring Puerto Rico in order with two strikeouts and a groundout to Sahvanna Jaquish (Highland, Calif.) at third base, Kirsti Merritt (Lake Panasoffkee, Fla.) put the U.S. on the board with a solo home run in the bottom of the second inning.

Another 1,2,3 inning by Osterman and the U.S. defense brought the heavy-hitting offense back to the plate to do additional damage. McCleney and Ali Aguilar (Orangevale, Calif.) hit back-to-back singles and Arioto’s second hit of the game gave McCleney time to score from second to extend the lead to 2-0. Garcia drove in another run with a single to left and a sac bunt advanced the two base runners into scoring position. An intentional walk to Merritt loaded the bases until a passed ball allowed Arioto to score to make it 4-0, USA, after three innings.

A two-run blast by Delaney Spaulding (Rancho Cucamonga, Calif.) in the bottom of the fifth inning added some cushion to the U.S. lead, which held through the remainder of the contest with Team USA capturing the 6-0, shutout win.

McCleney had a perfect day at the plate, going 3-for-3 with one run scored and one walk while Aguilar and Arioto each picked up two hits in the contest. Osterman got the win in the circle, tossing six frames with 13 strikeouts, two hits and one walk allowed while Garcia closed the game with two strikeouts.

“We’re starting to play USA Softball and swing the bats like we know how,” said Osterman after today’s win. “That’s fun to see, and that’s what we’re going to try to continue to do the rest of the Pan American Games.”

Team USA returns to action on August 6 with a 10 a.m. CT matchup against No. 3 Canada. Team USA enters the game with a 22-2 all-time record against Canada in Pan American Games history. Live stats will be available throughout the Pan American Games and fans at home can follow along with recaps and more at USASoftball.com.