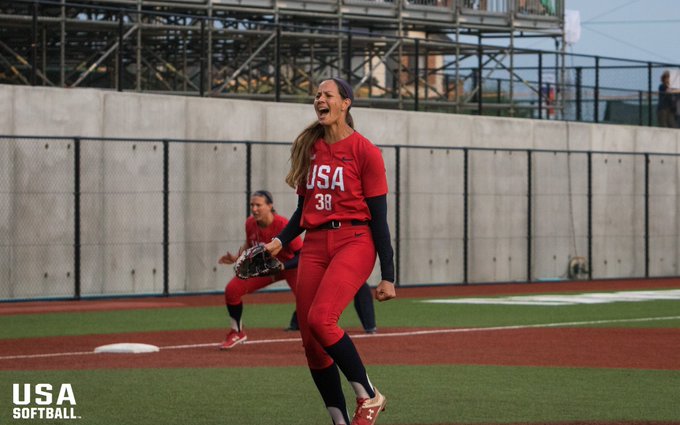 Takasaki City, Japan — The final meeting between world-ranked No. 1 USA vs No. 2 Japan prior to the Tokyo 2020 Olympic Games showcased what many expect to see next July – a stadium packed with fans and a hard-fought battle between the two softball powerhouses. With just one run deciding the game, a three-run home run off the bat of Valerie Arioto (Pleasanton, Calif.), who earned the title of 2019 Japan Cup Most Valuable Player (MVP), proved to be the difference maker in a game that saw three Olympic pitchers in the circle. For Team USA, it was the pitching duo of Monica Abbott (Salinas, Calif.) and Cat Osterman (Houston, Texas) that limited Japan to two runs while Yukiko Ueno faced Team USA for the first time since the Gold Medal Game of the 2018 World Baseball Softball (Confederation (WBSC) Women’s Softball World Championship.

Click here for box scores from the 2019 Japan Cup

“This tournament showed a complete maturation of the 2019 season for our program,” said Women’s National Team Head Coach, Ken Eriksen (Tampa, Fla./Head Coach at South Florida). “When you’re able to stay together as a unit and progress from playing independently to becoming a team, things come to fruition and you saw that as we won the USA Softball International Cup, the Pan American Games Gold and now the Japan Cup. The pitchers were really starting to gel, the catchers really knew how to work batter’s and our defense bought in to how we play together. Our support staff is unreal. We have to thank Mike Roberts, Lance Glasoe, Howard Dobson, Laura Berg and Tairia Flowers who volunteered their time all summer long. Total team effort today.”

Like they’ve done in each contest at the 2019 Japan Cup, Team USA struck first and right out the gate in the top of the first inning. Haylie McCleney (Morris, Ala.) led off the game with a walk but was held up at first base with a popup to third. A single to right field from Ali Aguilar (Orangevale, Calif.) put two on for Arioto, who delivered a three-run home run to left field that put the Eagles out on top 3-0.

Monica Abbott (Salinas, Calif.) got the start in the circle for the U.S. and fired a strikeout to her first batter faced and two slow rollers to the infield retired Japan in order.

A walk to McCleney was the only offense the U.S. mustered in the top of the second, bringing Japan back to the plate where they brought the game within one run. A leadoff single from Yu Yamamoto put the leadoff on base before a two-run home run by Saki Yamazaki cleared the bases and made it a 3-2 ballgame.

No additional runs crossed the plate throughout the remainder of the game, though both sides put plenty of base runners on through the next five innings of play.

Arioto singled in the top of the third while a leadoff double by Japan in the bottom of the frame threatened to tie the ballgame. A sac bunt, line out and strikeout from Abbott ended the threat, however, with Team USA holding their one-run lead.

The Red, White and Blue looked to score a run in the top of the fourth after a one-out single by Aubree Munro (Brea, Calif.) and walk to Jazmyn Jackson (San Jose, Calif.), but a great catch by the right fielder on a McCleney line drive and strikeout prevented a run from scoring.

The U.S. put another pair of runners on base in the top of the fifth after Arioto picked up her third hit of the contest and Delaney Spaulding (Rancho Cucamonga, Calif.) was hit by a pitch, but a strikeout and ground ball ended the at-bat.

Japan put base runners on in the bottom of the fifth and sixth innings by way of singles, but each time the U.S. defense held steady and got out of the innings unscathed.

In their final at-bat of the contest, Team USA threatened once again after Aguilar singled and Arioto walked, but a strikeout and fly ball brought Japan back to the plate. Three outs away from the win, a fly ball, strikeout from Cat Osterman (Houston, Texas) and ground ball to Spaulding at shortstop ended the game with Team USA earning the victory.

Arioto was simply outstanding at the plate, driving in all of Team USA’s runs while going 3-for-3 with a walk. Aguilar also continued a strong post season in the batter’s box, going 2-for-4 in today’s win.

From the circle, Abbott earned the win after tossing five innings with four strikeouts, four hits and two runs allowed. Osterman got the save, pitching the final two frames with three strikeouts and one hit allowed.

“I don’t think anybody should get lost on what transpired here today,” Eriksen added when asked about tonight’s game setting the tone for the Tokyo 2020 Olympic Games. “The history of these two programs for one and then to see some of the greatest players to ever play the game and represent our sport at the international level – Yukiko Ueno, Eri Yamada, Cat Osterman, Monica Abbott, Valerie Arioto, Natsuko Sugama and Yu Yamamoto to name a few. These athletes are the heart and soul of this sport and every little girl around the world who plays softball should want to play like these women. Phenomenal athletes.”

Members of the 2019 USA Softball WNT, along with additional invitees, will now set their sights on the 2020 Olympic Team Selection Trials, which are slated for October 1-6 in Oklahoma City, Okla. The roster for the 2020 USA Softball WNT, which will be led by Eriksen, will be announced at the conclusion of the Selection Trials and a press conference featuring the 2020 roster will be held on the morning of October 8.

From Selection Trials, the 2020 WNT will participate in the “Stand Beside Her” tour, a series of competitions and training opportunities as they prepare for the 2020 Tokyo Olympic Games. The “Stand Beside Her” message encourages fans everywhere to stand united in their support of the WNT and the United States in their journey to the Olympic Games.

The complete schedule for the “Stand Beside Her” tour, including dates and locations, will be announced at a later date.