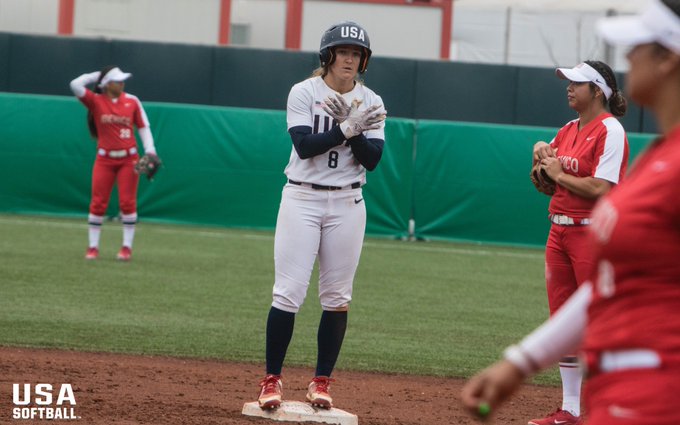 LIMA, Peru — Five members of the USA Softball Women’s National Team (WNT) had multi-hit performances as Team USA erupted for 12 hits in a 9-0 (six innings) shutout win over Mexico in their Pan American Games opener. Led by Ali Aguilar (Orangevale, Calif.), who’s three-run home run set the tone early in the top of the first inning, the U.S. also had a strong showing in the circle by Monica Abbott (Salinas, Calif.) who fanned 13 batters in a complete-game win.

“Things have been building up towards where we should be,” said WNT Head Coach, Ken Eriksen (Tampa, Fla./Head Coach at South Florida) on the resiliency of the U.S. offense in today’s win over Mexico. “Even though Ali Aguilar was struggling a little bit earlier in the year, we put her in a position to have success and get a lot of at-bats and she came through. Good hitters can’t be held down. We were under control today, and I think that’s the biggest thing. We were aware of what was going on in all facets of the game and played together.”

Team USA got the offense going early as Haylie McCleney (Morris, Ala.) walked and moved to second on a Janie Reed (Placentia, Calif.) bunt single. Aguilar put the U.S. on the board in dominant fashion, crushing a no-doubt home run over the left field fence to clear the bases.

Mexico singled in the bottom of the first inning with two outs, but no damage was done to bring the hot-hitting U.S. offense back to the plate. Aubree Munro (Brea, Calif.) carried the momentum into the second inning, sending out a solo blast to extend the lead to 4-0. Team USA put two more runners on base after a McCleney single and Aguilar was hit by a pitch with two outs, but a fly ball ended the at-bat.

The WNT held a 4-0 lead until the top of the fourth inning when they tacked on another run. McCleney picked up her second hit of the game with a one-out double and came around to score after a pair of illegal pitches to make it a 5-0 ballgame. Aguilar singled up the middle with two outs to extend the inning, but a diving play by the Mexico shortstop on what would have been a single up the middle by Valerie Arioto (Pleasanton, Calif.) brought Mexico to the plate. Mexico’s offense got their first runner on base since the bottom of the first inning after a two-out walk, but Abbott fired a strikeout to end the fourth.

Team USA extended their lead to six runs in the top of the fifth inning when Delaney Spaulding (Rancho Cucamonga, Calif.) singled to drive in Sahvanna Jaquish (Highland, Calif), who was hit by a pitch. Mexico’s final base runner of the game singled in the bottom of the frame, but another strikeout by Abbott kept Mexico scoreless.

Three additional runs in the top of the sixth inning put the game away for good for the Red, White and Blue. With one out, Reed and Aguilar hit back-to-back doubles and an intentional walk to Arioto loaded the bases. Jaquish was hit by a pitch for the second time of the game to plate one run and Spaulding singled up the middle to drive in another two, putting the U.S. up 9-0.

Needing three outs to earn the run-rule win, Team USA did just that as Abbott fired two strikeouts and a groundout to give the U.S. the 9-0 (six innings) win.

Aguilar had a perfect day at the plate, going 3-for-3 with three RBI and two runs scored. McCleney, Moultrie, Reed and Spaulding each picked up two hits with Spaulding also recording three RBI in the win.

“I think it’s huge for us to score first and get ahead early,” said Aguilar on getting out on top of Mexico early in the contest. “It makes a statement against the other team and that’s always been our philosophy.”

Team USA returns to action on August 5 with a 10 a.m. CT matchup against No. 4 Puerto Rico. Team USA enters the game with a 14-1 all-time record against Puerto Rico in Pan American Games history. Live stats will be available throughout the Pan American Games and fans at home can follow along with recaps and more at USASoftball.com.