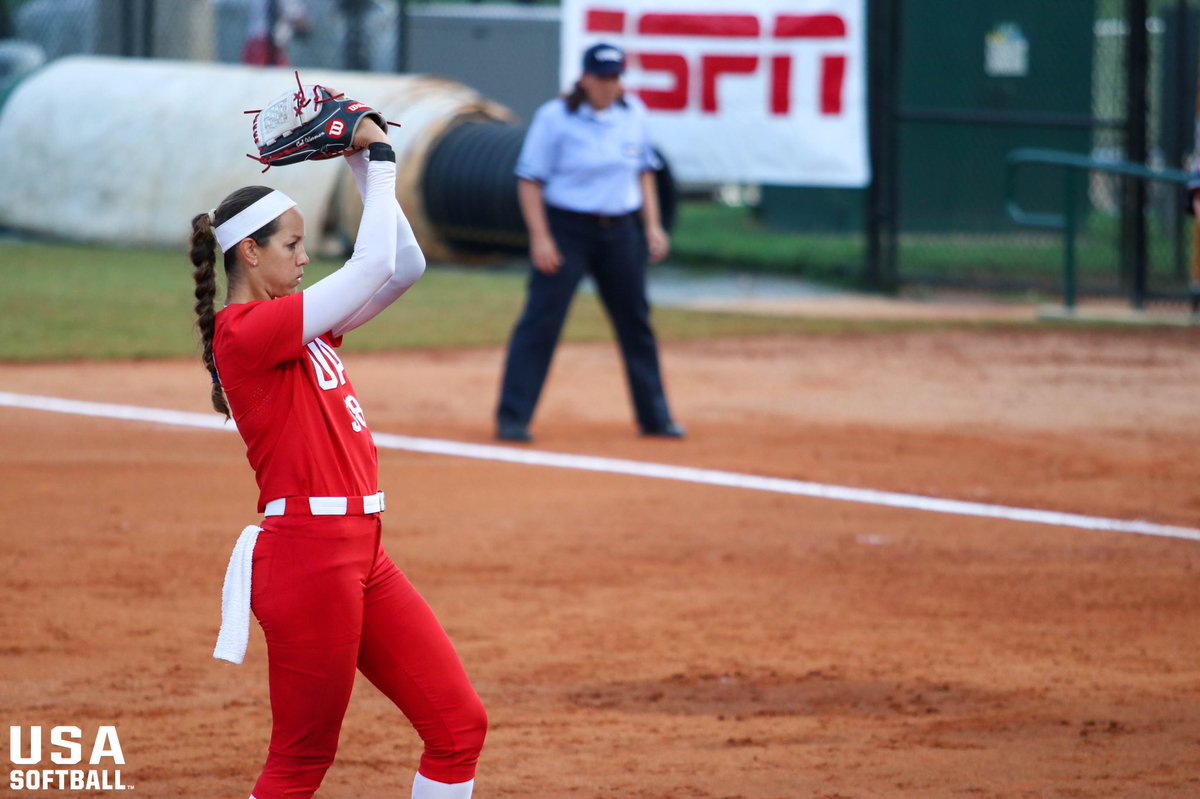 Under the lights of South Commons Softball Complex, fans at the stadium and around the country tuned in on the ESPN network to watch the U.S. Women’s National Team pull off the 1-0 win against world-ranked No. 6 Chinese Taipei. Cat Osterman (Houston, Texas) struck out 12 batters, bringing her total to 24 strikeouts through two appearances at the tournament, while Michelle Moultrie (Jacksonville, Fla.) came through for the Red, White and Blue with a walk-off single.

Earlier in the day, it was Charla Echols (Newnan, Ga.) who came up big for the U-19 WNT after a two-run home run helped her team to a 2-1 win over Scrap Yard Fast Pitch.

Click here for box scores from the USA SoftballInternationalCup

Rain and lightning couldn’t delay the action at the USA Softball International Cup as the U-19 WNT pulled off a narrow 2-1 win over Scrap Yard Fast Pitch.

After Scrap Yard took a 1-0 lead in the bottom of the second, the U-19 squad responded in kind with a pair of their own in the top of the third. A leadoff single from Kelli Godin (Seal Beach, Calif), followed by a stolen base, her fifth of the tournament which lands her atop the tournament leaderboard in stolen bases, put a runner in scoring position. A sac bunt from Skylar Wallace (Woodstock, Ga.) advanced Godin to third before Echols sent a ball out of the park to give the Red, White and Blue the 2-1 lead.

That was the final at-bat prior to the nearly three-hour weather delay. Once the weather cleared up and teams resumed play, it was a pitcher’s duel as Team USA’s Lexi Kilfoyl (Land O’Lakes, Fla.) allowed just one batter to reach on a hit through the remainder of the game.

On a slow offensive night for the Red, White and Blue, a 12-strikeout performance by Osterman in the circle paved the way to a 1-0, walk-off win. Moultrie came up big for the U.S., driving in the winning run after entering as a pinch hitter in the bottom of the seventh.

With the offense unable to find the gap, both sides were retired in order six times throughout the contest as pitching was the name of the game. For Chinese Taipei, Lin Ying-Hsin limited the hot-hitting U.S. offense to just six hits while Osterman allowed just three batters to reach base.

Team USA looked to break the scoreless streak in the bottom of the sixth after Haylie McCleney (Morris, Ala.) legged out a fly ball to right for a triple with one out. Chinese Taipei’s defense prevented the run from scoring after a ground ball from Janie Reed (Placentia, Calif.) to the second baseman was thrown home to get McCleney out.

The U.S. stayed resilient, however, as Valerie Arioto (Pleasanton, Calif.) singled on a line drive to right field in the bottom of the seventh – becoming the first leadoff batter of the game to reach base safely for the home team. Sahvanna Jaquish (Highland, Calif.) entered as a pinch runner for Arioto and advanced to second on a routine sac bunt from Delaney Spaulding (Rancho Cucamonga, Calif.)

With the WNT looking to plate a run and end the game via the walk-off after Ali Aguilar (Orangevale, Calif.) drove a ball through the left side, Chinese Taipei made another great play at the plate to prevent Jaquish from scoring.

With Aguilar at second base and two outs, Moultrie entered as a pinch hitter and drove a ball up the middle on the first pitch of the at-bat, driving in Aguilar and sealing the walk-off win.

Osterman continues to shine in the circle for the WNT, earning her second win of the tournament. Rachel Garcia (Palmdale, Calif.) saw action in the circle as well, retiring her one batter faced with a fly ball to the outfield.

Both teams return to action on July 5 with the U-19 WNT opening the day at 11 a.m. ET against world-ranked No. 2 Japan. The WNT will also square off against in a 6 p.m. ET showdown live on ESPN2 for the battle of the unbeatens at the USA Softball International Cup.