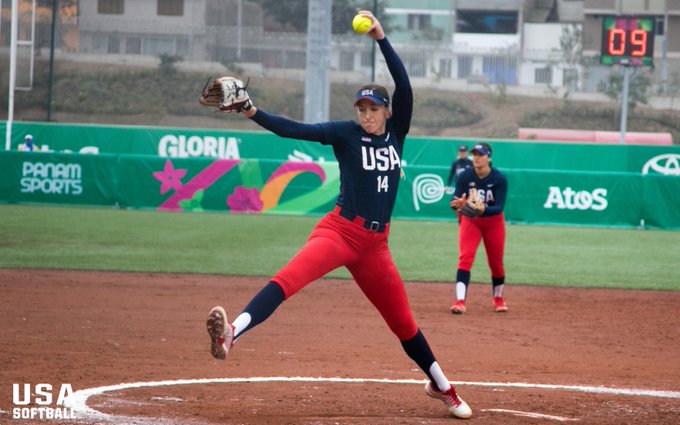 LIMA, Peru — Monica Abbott (Salinas, Calif.) shined in the circle as the USA Softball Women’s National Team (WNT) stayed perfect at the Pan American Games with a 6-1 win over No. 3 Canada. Despite trailing by one run through the first two innings of play, the U.S. used textbook softball and big swings from Haylie McCleney (Morris, Ala.) and Delaney Spaulding (Rancho Cucamonga, Calif.) to come-from-behind and pick up the “W”.

“We haven’t gotten punched in the mouth early in this tournament, and we did today,” said WNT Head Coach, Ken Eriksen (Tampa, Fla./Head Coach at South Florida) on today’s come-from-behind win over Canada. “How we responded was tremendous. We just played fast pitch softball. We moved the ball, put runners on base and came up with the timely hit and then Monica just shut them down the rest of the game. I was really happy with her performance. She was a leader from the circle today and didn’t let anything get to her, even after that home run. She beared down and made some great pitches. She and Aubree really work well together and that bodes well for us moving forward.”

The U.S. put a runner on early as Janie Reed (Placentia, Calif.) singled and moved to second on a fielding error on the throw to first, but a fly ball and groundout kept Reed from advancing. Canada took the lead in the bottom of the first with a two-out, solo home run, but Abbott shut down the offense with her second strikeout of the game to keep the damage to one run.

Both sides were retired in order in the second inning as Team USA entered the third trailing by one run. With one out, the U.S. offense lit up for three runs to take the lead and never look back. Kelsey Stewart (Wichita, Kan.) got the rally going with a single and moved to second on a single by McCleney. With two on, Reed slapped a ball over the head of the shortstop for a single to load the bases.

Ali Aguilar (Orangevale, Calif.) put the Red, White and Blue ahead with a two-run single through the right side of the infield and a sac fly from Valerie Arioto (Pleasanton, Calif.) plated the third run of the at-bat.

Team USA held a 3-1 lead over Canada as Abbott and the U.S. defense retired the side in order in the bottom of the third inning. Canada threatened in the bottom of the fourth after a leadoff hit batter and two-out walk, but a strikeout kept the two-run lead for Team USA.

That score held until a solo shot by McCleney in the top of the fifth inning extended the lead to three runs. The U.S. added another two in their final at-bat of the game as Michelle Moultrie (Jacksonville, Fla.) led off the top of the seventh by nearly sending the ball out of the park for a standup triple. Spaulding cleared the bases with a two-run home run, putting the U.S. up 6-1.

Three outs away from the win, a groundout and two strikeouts from Abbott in the circle ended the game with Team USA earning the 6-1 win.

Offensively, McCleney continued her hot-hitting ways with a 3-for-4 showing at the plate with two runs scored while Reed had a 2-for-4 day at the plate. Aguilar and Spaulding each picked up two RBI in the win.

Abbott picked up her second win of the Pan American Games in a complete-game performance. Dishing out 12 strikeouts, Abbott allowed just four base runners, two with singles, one walk and one hit batter.

“Canada is a strong team and they definitely came out aggressive on offense,” said Abbott. “I have to give props to Aubree Munro, my catcher. We adjusted really well throughout the game to Canada’s hitting plan. Our offense really picked me up early, and once I saw that I really just wanted to go out there and shut them down.”

Team USA returns to action on August 7 with a 10 a.m. CT matchup against No. 16 Venezuela. Team USA enters the game with a 6-0 all-time record against Venezuela in Pan American Games history. Live stats will be available throughout the Pan American Games and fans at home can follow along with recaps and more at USASoftball.com.