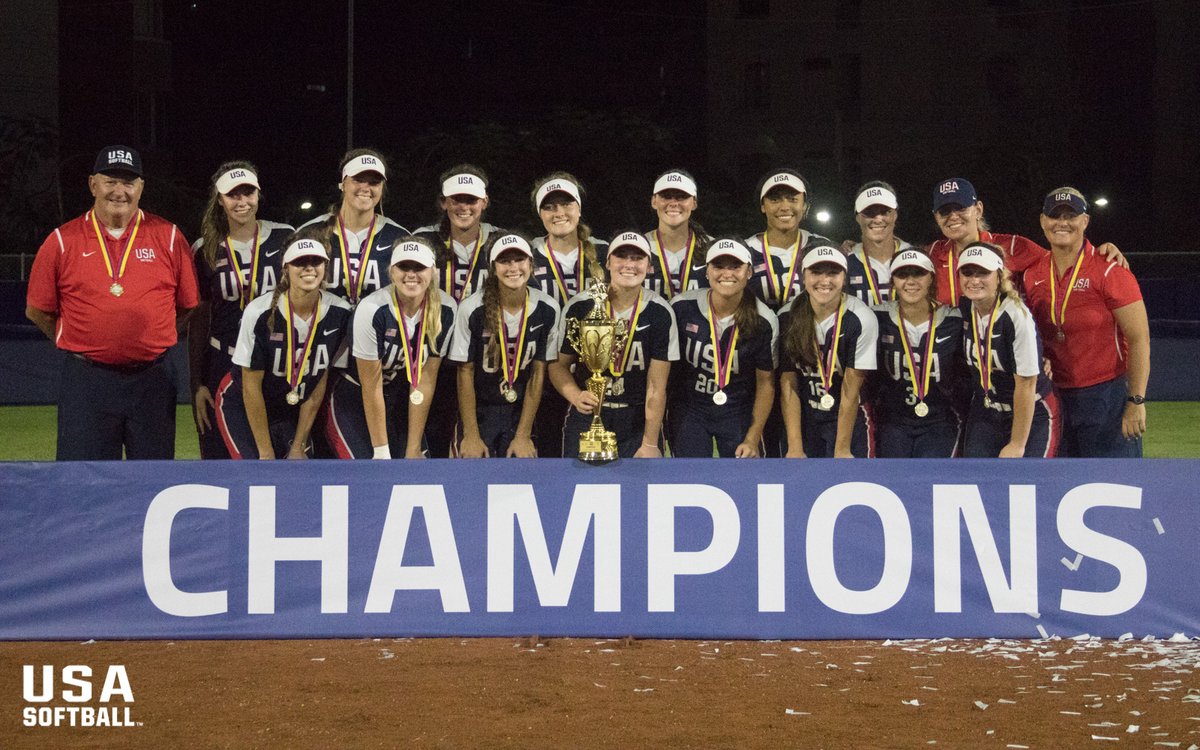 “I am speechless and truly blessed by the opportunity to get to know each of these amazing young women,” said Head Coach Kyla Holas (Pasadena, Texas). “They are the future of this sport and represented their country with outstanding class. They accomplished something as a team that will be with them for the rest of their lives. Thanks to all for making this an amazing experience.”

Neal started for the U.S. and despite issuing a walk, retired the next two batters on a sacrifice bunt and strikeout before catcher Jessie Blaine (Wentzville, Mo.) picked off the runner at third to close out the inning. Hodge dropped a fly ball into left field to lead off the bottom half of the frame and after advancing to second on a wild pitch, was left stranded after a strikeout and back-to-back fly outs ended the first inning.

Mexico reached on a walk in the second and while a sacrifice bunt moved the runner, she would be caught attempting to advance after the next batter grounded into a fielder’s choice. A fly out followed to give the U.S. its second shot at the plate. Wacaser looked to get the scoring started for the Red, White and Blue with a leadoff single but three straight fly outs ensued to end the inning.

Retiring the Mexico side in order on a pair of strikeouts and a groundout, the U.S. returned to the plate. Hodge hit a one-out single up the middle and after stealing second, sprinted home to score after Maddie Gallagher (Port Washington, N.Y.) hit a fly ball to right field. After the throw home, Gallagher advanced to third but was left stranded after a fly out and strikeout signaled the start of the fourth inning.

Mexico placed two runners on base after an error and single in the top of the fourth inning but with two outs, a groundout to Neal kept them off the board. Reaching third on a leadoff triple in the bottom half of the frame was Wacaser, who crossed home after Tieley Vaughn (Tampa, Fla.) singled and an overthrown ball.

Ahead 2-0 after four innings, the U.S. defense continued to work and sat down the side in order for the second time in the top of the fifth inning. Hodge reached on a hit-by-pitch but a strikeout, fly out and groundout prevented them from scoring additional runs.

Managing to get their second hit of the game, a two-out single put a runner on for Mexico in the sixth inning but a groundout followed to end the half-inning. Despite an error by the shortstop allowing Vaughn to reach first safely with two outs, a groundout kept the score at 2-0.

Needing just three outs to secure their eighth win and finish the U-17 Women’s Pan American Championship as undefeated Gold Medalists, the Red, White and Blue did just that. A groundout and back-to-back fly outs sealed the 2-0 victory for the U.S.

About USA Softball
USA Softball is a 501(c)(3) not-for profit organization headquartered in Oklahoma City, Okla., and is designated as the National Governing Body (NGB) of Softball in the United States and a member of the United States Olympic Committee. One of the nation’s largest sports organizations, USA Softball sanctions competition in every state through a network of 69 local associations and has grown from a few hundred teams in the early days to over 150,000 teams today, representing a membership of more than 2 million.  USA Softball is dedicated to providing people of all ages the opportunity to play the game they love at a variety of levels by offering recreational, league, tournament and competitive play for fast pitch, slow pitch and modified pitch.  USA Softball annually conducts thousands of tournaments throughout the country including over 100 National Championships.  The USA Softball umpire program is among the nation’s largest and are widely known as the best trained umpires in the game.

About the World Baseball Softball Confederation
Headquartered in Lausanne, Switzerland — the Olympic Capital — the World Baseball Softball Confederation (WBSC) is the world governing body for baseball and softball. WBSC has 202 National Federation and Associate Members in 143 countries and territories across Asia, Africa, Americas, Europe and Oceania, which represent a united baseball/softball sports movement that encompasses over 65 million athletes and attracts approximately 150 million fans to stadiums worldwide annually.

The WBSC governs all international competitions involving official National Teams. The WBSC oversees the Softball World Championships (Men, Women, U-19 Men, and U-19 Women), Premier12, World Baseball Classic, and Baseball World Cups (U-12, U-15, U-18, U-23 and Women’s).