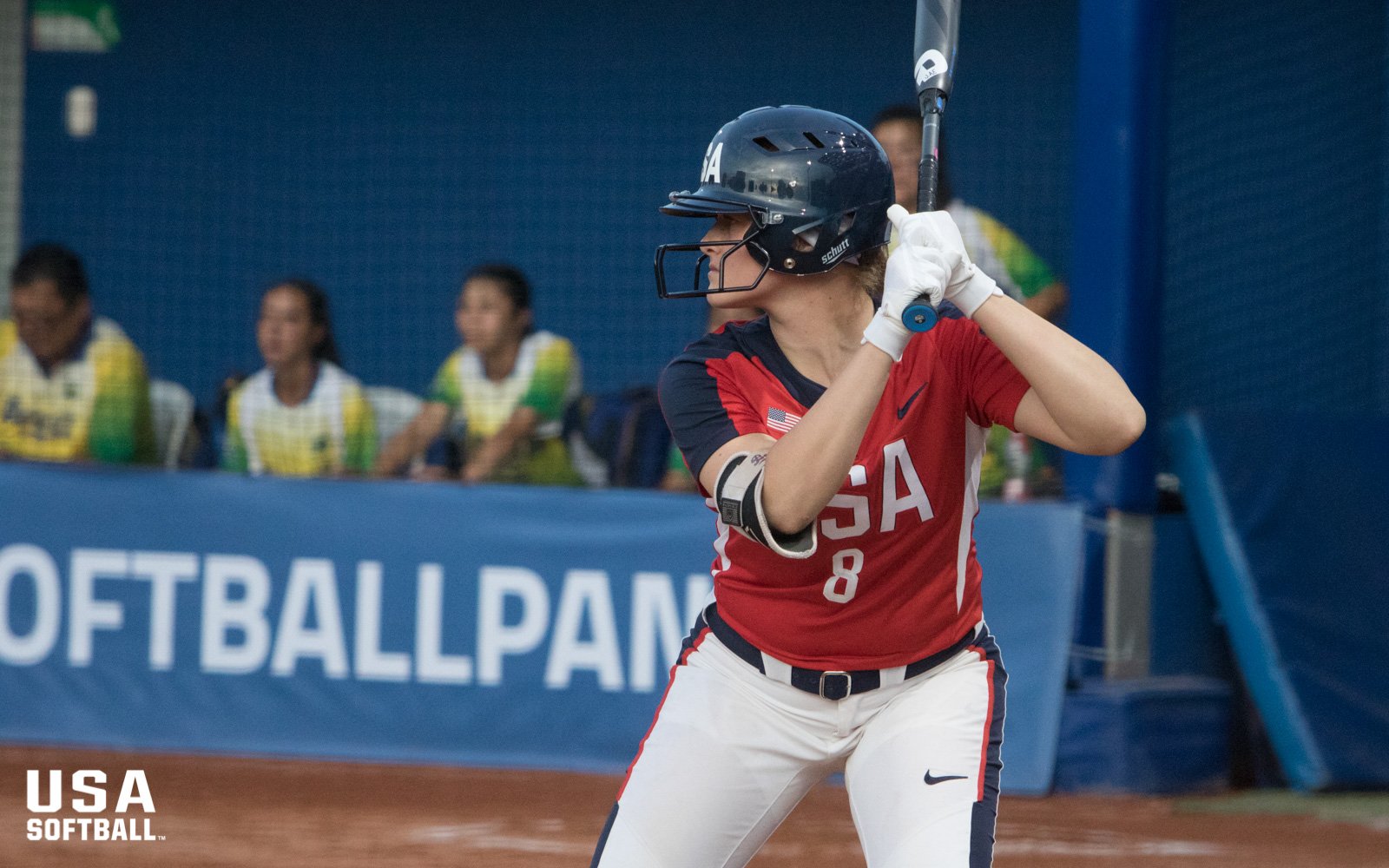 Leading off the bottom of the first for the U.S. was Avery Hodge (Fulshear, Texas) who took first after a hit-by-pitch and after advancing to second on a sac bunt from Riley Blampied (Cordele, Ga.), Casey Goguts (Reading, Pa.) singled home Hodge with a single up the middle to put the Red, White and Blue on the board.

Three straight singles from Hallie Wacaser (Centerton, Ark.), West, and Rachael Jones (Bennington, Vt.) loaded the bases quickly in the bottom half of the second inning. One out later, Wacaser tagged up on a fly ball left off the bat of Hodge to score the second run before West came around the bases to score on the throw home.

Brazil doubled to lead off the third frame and while a groundout allowed the runner to advance to third, West and the U.S. defense followed with a strikeout and fly out to keep Brazil at zero. Meanwhile, the U.S. tacked on a fourth run in the bottom half of the inning after Goguts scored on a bases-loaded groundout to the first baseman.

The score remained 4-0 in favor of the U.S. through the fourth inning and while Harris entered the circle to start the fifth to keep Brazil scoreless, the U-17 WNT was kept from extending their own lead in the bottom half of the frame.

Retiring the Brazilian lineup in order through the top of the sixth, the U.S. tacked on a fifth run after Maddie Gallagher (Port Washington, N.Y.) tagged up on a fly ball to centerfield from Hodge. The U-17 WNT closed out the game and earned the 5-0 win after retiring Brazil for the fourth time.

Through four innings of work, West allowed just two hits and zero runs and struck out two batters. Harris threw three innings in relief and struck out six while keeping Brazil off the bags.

“Some stand-up performances from Hallie and Madison today,” said Head Coach Kyla Holas (Pasadena, Texas). “I thought Hallie had some great at-bats and Madison was the first pitcher to not give up a walk in her first start.”

The U.S. is back in action tomorrow, October 13 at 4:30 p.m. CT against Mexico. Live stats will be available through USASoftball.com while WBSC has provided streaming through Gametime.Sport.

A total of 33 games will be played across nine days as participating countries battle it out to qualify for the 2020 World Baseball Softball Confederation (WBSC) U-18 Women’s Softball World Cup. The 10 participating countries were drawn into two groups. Competing in Pool A, the U.S. is slated for additional matchups against No. 5 Mexico on October 13 at 4:30 p.m. CT and No. 25 Argentina on October 15 at 11:30 a.m. CT after improving to 2-0 in pool play.

About the World Baseball Softball Confederation
Headquartered in Lausanne, Switzerland — the Olympic Capital — the World Baseball Softball Confederation (WBSC) is the world governing body for baseball and softball. WBSC has 208 National Federation and Associate Members in 135 countries and territories across Asia, Africa, Americas, Europe and Oceania, which represent a united baseball/softball sports movement that encompasses over 65 million athletes and attracts approximately 150 million fans to stadiums worldwide annually.