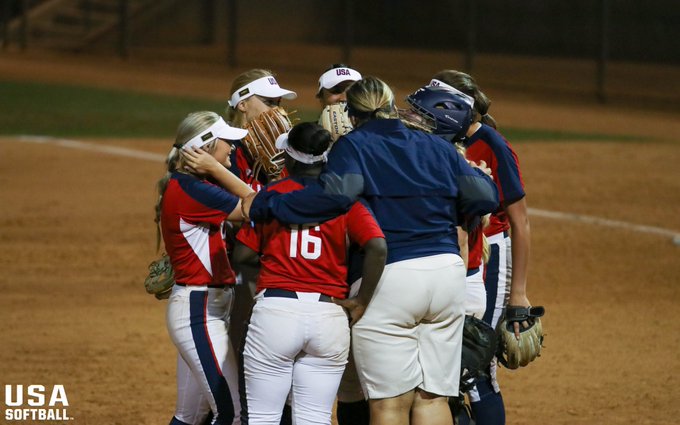 IRVINE, California – The U-19 Women’s National Team (WNT) picked up two wins today at the World Baseball Softball Confederation (WBSC) U-19 Women’s World Cup with wins over Chinese Taipei and Japan. The team advances to 7-0 in the tournament with seven straight shutout victories and is the only remaining undefeated team.

“I think this team as a whole is going to keep chipping away and doing our best,” Megan Faraimo (Vista, Calif.) said. “We have been preparing for this the whole summer and so I think we are ready for whatever comes our way.”

In game one against No. 6 Chinese Taipei, the U.S. scored early thanks to a sacrifice fly from Charla Echols (Newnan, Ga.) to drive in Skylar Wallace (Woodstock, Ga.) who reached on a walk. Once they get on, they’re duo is a threat. Wallace and Echols have combined to score the first run in every game for the U.S., all coming in the first inning.

The long ball struck early for the Eagles with Jasmine Sievers (Laguna Niguel, Calif.) delivering a solo shot to give the U.S. a 2-0 lead in the bottom of the first.

Team USA’s bats went quiet in second and third but came back alive in the fourth with a single from Kelley Lynch (Newnan, Ga.) to score Julia Cottrill (Stillwater, Okla.) who reached on a single. Echols followed with another sacrifice fly to score Lynch and give the Eagles a 4-0 lead.

The U.S. would break it open in the fifth starting with singles from Bailey Dowling (St. Joseph, Ill.) and Cottrill followed by back-to-back doubles from Jadelyn Allchin (Fountain Valley, Calif.) and Lynch to score Dowling and Cottrill. Taylor Pleasants (Houston, Tx.) singled to left field to score Allchin and secure the 7-0, five inning victory.

In the circle, Alexis Kilfoyl (Land O’Lakes, Fla.) went three innings with three strikeouts giving up just two hits. Lynch came in in relief in the fourth inning and registered two strikeouts on zero hits to secure the first win of the day for Team USA.

In game two it was a matchup between No. 1 USA and No. 2 Japan. The teams entered the game as the final two undefeated teams left in the tournament.

“It is really fun playing against a team of that caliber,” Faraimo said of Japan. “I respect them a lot and it is an honor to be here on the field with them…It is definitely a level of competition we all dream of.”

Wallace would lead off for the U.S. with a 12-pitch battle in the box before hitting a single to get on for Team USA. Echols followed with a ground ball that was overthrown at first base allowing Wallace to take third base. While rounding third base, Wallace was able to pick up an obstruction call and score the only run for the U.S.

“In my at bat I was just trying to compete and find a way to get on base. Being leadoff you find a way to get on because you have good people to back you up,” Wallace said. “Once I got on, it was just advance to a base each time and so once I saw the over throw I took third and got obstruction so I went home knowing they would send me back or I would be safe at home.”

The bats would go quiet for the rest of the game for Team USA and Faraimo would take care of the rest. Faraimo went the full seven innings tossing 14 strikeouts and giving up just three hits. She now has 34 strikeouts in just 14 innings pitched at the World Cup.

“I knew at some point this team was going to be facing an opponent that would challenge us like this,” Faraimo said. “In the games where we were able to score a lot of runs I played mental games with myself saying that it is a 0-0 ball game, or this pitch was the pitch that would win the game so for this game to be a one run ballgame it didn’t really feel like something new because I had been preparing myself for that.”

Japan would threaten in the seventh inning with a leadoff double but Faraimo responded with a strikeout and a fly ball easily handled by Wallace for the first and second outs of the inning. Cottrill would end the game for Team USA by throwing out the runner on an attempt to steal third base.

“Knowing how big of a deal the World Cup is, it just makes me want to compete more,” Faraimo said. “What is on the field is raw passion and I just can’t really control it.”