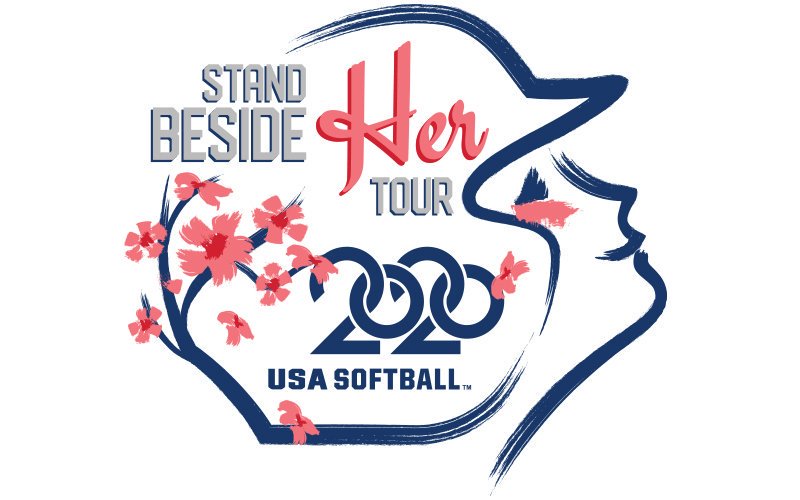 OKLAHOMA CITY – USA Softball is proud to announce the “Stand Beside Her” tour, a series of competitions and training opportunities for the 2020 USA Softball Women’s National Team (WNT) as they prepare for the 2020 Tokyo Olympic Games. The “Stand Beside Her” message encourages fans everywhere to stand united in their support of the WNT and the United States in their journey to the Olympic Games.

“I love that the title of our tour will be embodying unity – something that is so important to me as both a player and a person,” said 2019 WNT member Janie Reed. “One thing that is so unique about our team is that although we have to essentially ‘compete against each other’ each year at tryouts, one of our core values is to stand beside one another in all that we do. We cheer for each other, we celebrate one another, and we’d be there for each other on or off the field no matter what.”

The “Stand Beside Her” tour evokes a powerful message of unity aimed to inspire communities to stand beside HER – the members of the WNT, America and the future generation of female athletes.

“The message ‘Stand Beside Her’ isn’t just about our team,” Reed continued. “It’s about us standing beside the girl that wants to be where we are one day, it’s about men pledging to stand beside women in full support, it’s about standing beside the United States of America. The title is so much more than a catchy phrase and we are so much more than softball players, so I think it’s perfectly fitting.”

With the return of softball to the Tokyo 2020 Olympic Games program, the “Stand Beside Her” tour provides much-needed training and competition for the 2020 WNT in their preparation for the Olympic Games while also giving fans a chance to watch the Red, White and Blue in person. Olympic competition will start July 22, 2020 with the Gold Medal Game being played on July 28.

“How more appropriate is it than to have a tour themed ‘Stand Beside Her’ for the women that represent the United States of America and for what our flag stands for on and off the softball field,” said WNT and Tokyo 2020 Olympic Head Coach, Ken Eriksen. “This tour provides not only the softball community’s opportunity to stand beside our team and the flag for all it represents during the Olympic tour, but also for the rest of the country to be able to re-familiarize themselves with our great sport. This venture will prepare our team, Team USA, for the opportunity to regain the Olympic Gold Medal at the 2020 Tokyo Olympics. The schedule will include not just exhibition games against some of the top collegiate programs in the country, along with some potential games against pro teams, but will also include sections of the spring to train as a team in great environments. I look forward to seeing the patriotism and support the soon-to-be Olympic athletes deserve.”

The complete schedule for the “Stand Beside Her” tour, including dates and locations, will be announced at a later date.

If you are interested in partnering with USA Softball on the Stand Beside Her tour, please contact Managing Director of Marketing, Dre McKee, at amckee@usasoftball.com.