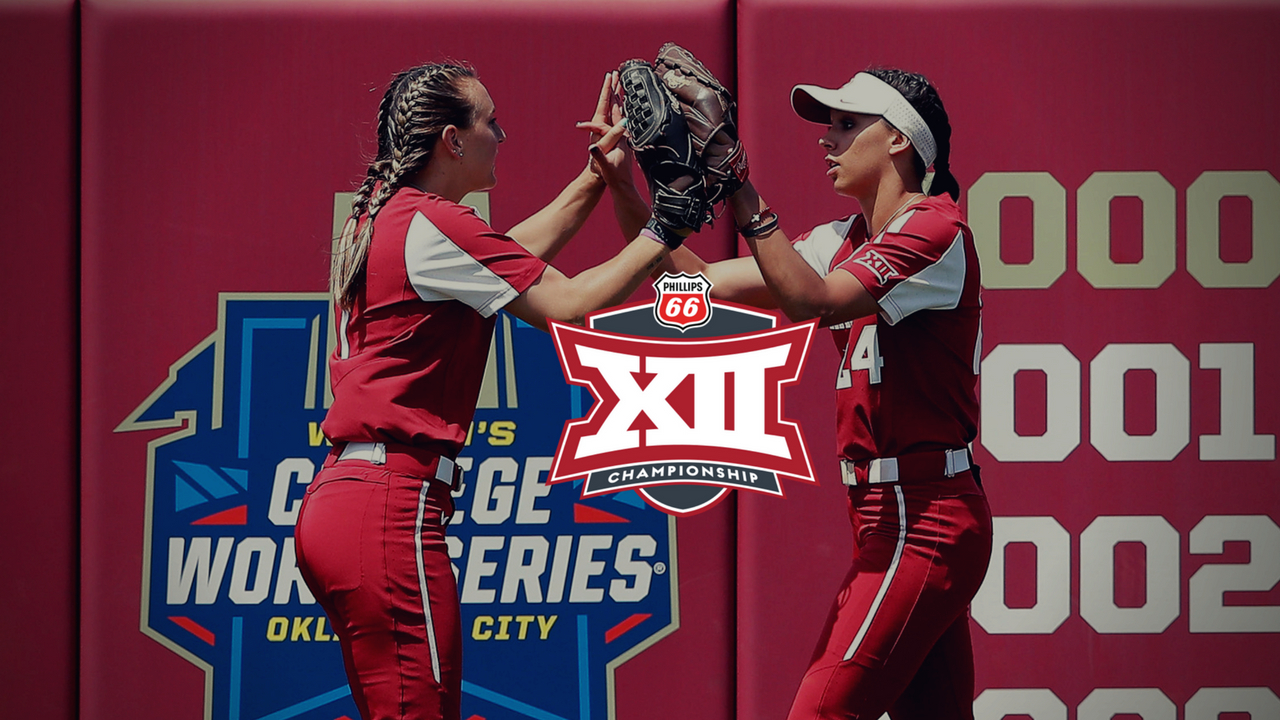 The 2018 Phillips 66 Big 12 Softball Championship has been set and will take place May 11-12 at USA Hall of Fame Stadium Complex in Oklahoma City.

The top-six teams in the conference will descend on Oklahoma City to compete in a combination of pool play format (Friday) and bracket play (Saturday). The championship game is slated to begin at 4 p.m. CT Saturday, May 12 on FS2.

Favorites to Win It All

Oklahoma earned the No. 1 seed after going an undefeated 18-0 in Big 12 conference play this season. The Sooners lead the Big 12 in batting and pitching team categories. Oklahoma enters the tournament with a .326 team batting average, .433 on base percentage, and .543 slugging percentage. The Sooners have combined for 416 hits and 321 RBI on the season. The Sooner pitching staff has a combined 1.09 ERA on the season and a .179 batting average against. Oklahoma’s three headed pitching monster consists of seniors Paige Parker, Paige Lowary, and sophomore Mariah Lopez. Parker leads the trio in innings pitched with 140 on the season. The senior left hander is 24-2 and holds a 0.85 ERA with 168 strike outs. Lopez is next in line in innings pitched with 75.1. The right hander is 14-0 and holds a 1.39 ERA. Lowary has tossed 68.2 innings this season and holds a staff best 0.82 ERA.

Oklahoma State is the No. 2 seed entering the tournament. The Cowgirls ended the regular season with a .315 team batting average, .405 on base percentage, and a .487 slugging percentage. The offense is led by Vanessa Shippy, who holds a .460 batting average of her own. The senior left handed hitter has a .613 on base percentage, a .653 slugging percentage, 69 hits, 65 runs scored, and 54 walks on the season. The pitching staff, who used a pitch by committee approach this season, combined for a 2.57 ERA and 209 strike outs.

Baylor holds the No. 3 seed for the Big 12 tournament after finishing the regular season with a 35-14 overall record and 12-6 in conference play. The Lady Bears rank second behind Oklahoma in team batting average with .321. The offense has recorded 414 hits on the season. The pitching staff ranks third in ERA in the Big 12 with 2.41. Gia Rodoni has tossed the majority of the innings for the Lady Bears. The junior is 21-9 and holds a 2.04 ERA and leads the Big 12 with 237 strike outs on the year. Baylor enters the tournament on a high note, coming off a weekend sweep of No. 4 Big 12 tournament ranked Texas.

The junior is batting .444 on the season and holds an impressive .739 slugging percentage. Romero has recorded 68 hits, 12 doubles, 11 home runs, and 52 RBI for the Sooners.

The senior is third in the conference in batting average and is hitting .458. Scroggins holds a .578 slugging percentage with 76 hits, 12 doubles, 43 runs scored, and 27 RBI.

We predict the defending National Champions will come out on top of the Big 12 Tournament. Oklahoma has the most depth in the hitting lineup and in the circle out of the six competing teams. With three dominant arms to choose from and each more than capable of going the distance, we give the edge to the Sooners. Who they will compete against for the title is uncertain. We predict the contender will be Oklahoma State or Baylor. The Sooners swept the series against both OSU and Baylor this season, but we suppose anything can happen in Big 12 tournament play.

Stay up to date on all of this weeks National Conference Tournament scores at http://fastpitchnews.com/scoreboard/