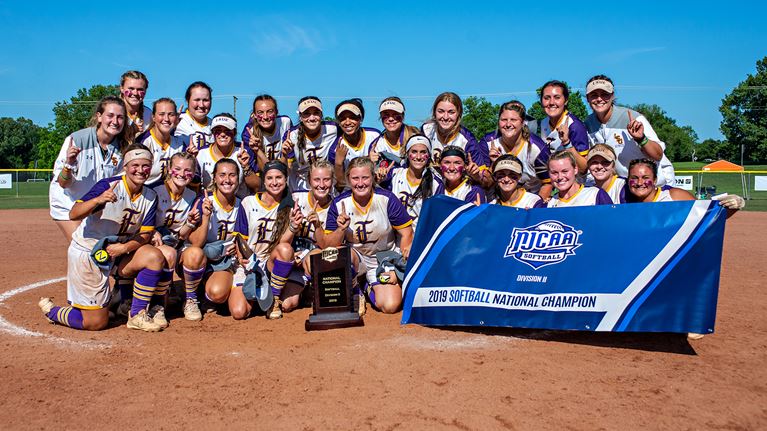 CLINTON, Miss. – LSU Eunice pounded three early home runs and relied on another gem from Most Outstanding Pitcher Jensen Howell to grab a 10-5 win over Phoenix College in the NJCAA Division II National Championship Game on Saturday.  The Bengals (52-6) swept through the tournament to clinch the program’s sixth National Title.

“The girls just came to play – we got some big hits off a great pitcher and our team just refused to lose,” LSU Eunice head coach Andy Lee said.  “I’m proud of every one of them, they’ve worked extremely hard and this is a moment they will remember for the rest of their lives.”

Madison Monson delivered the early fireworks with a towering two-run home run to give LSUE the early 2-0 lead.  It was Monson’s team-best 14th home run of the season and third of Nationals.

“I knew with a full count I was going to get something to hit and I just took advantage of the situation,” LSU Eunice sophomore Madison Monson added.  “I knew that getting the big hit early was going to give us momentum and I couldn’t wait to pass the bat to my teammates.”

Phoenix would answer right back with two runs of its own in the bottom of the first, capitalizing on an error and sacrifice fly.

LSUE, however, seized control for good an inning later as the Bengals blasted a pair of home runs.  After the Bengals loaded the bases with two outs, Tournament Most Valuable Player Kelci Bodin crushed a grand slam to straight away center to give LSUE the lead for good.  Abbey Higginbotham would follow two batters later with a two-run shot to help the Bengals take an 8-2 lead.

Howell continued her week long dominance in the circle, scattering four hits while strikeout out seven batters in five innings of relief.  The sophomore improved to 22-3 on the season, earning Most Outstanding Pitcher after going 2-0 with a save and a 0.33 earned run average. Howell struck out 26 batters over the week while issuing just three walks.

“I had a go-get-it attitude after coming off the bench,” LSU Eunice pitcher Jensen Howell said.  “I knew they had scored some runs on us but my goal was to shut everything down and keep the foot on the gas.”

LSUE would get a pair of insurance runs with an Abbey Higginbotham RBI single in the fourth and Lele Martinez’s RBI double in the fifth inning.

“I just put my heart into this team and into this game to get here and I’m just so happy for everybody that we were able to do this,” Bodin said.

The Bengals have won the NJCAA Division II National Championship five of the last seven years.