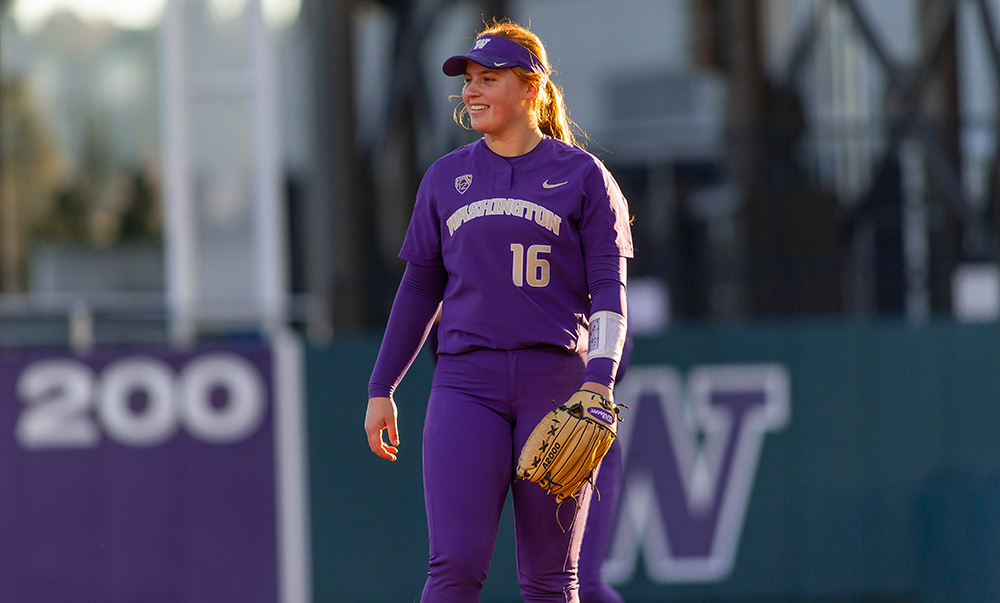 It’s been a memorable year for Plain which started in the off-season when her and the Huskies traveled to her home country of Australia. Plain talks to FPN about that trip, how she ended up at Washington, and playing with Taran Alvalo to form one of, if not the best, 1-2 punches in college softball.

Eric Lopez (ELO) : How does it feel to throw first back to back no hitter in Huskie history? When were you aware you were throwing the no -hitters?

Gabbie Plain : To be honest, I don’t think I really feel all that different. When I am in games, I am more focused on enjoying the game with my teammates, being there for them as much as I can, and I almost completely zone out everything else. I don’t realize when these things are happening cause I’m just completely caught up in the here and now.

ELO : What drew you to come to Washington?

Plain. Well, it was a very late call. I didn’t start looking at different universities in the States until my very last year of high school. Originally I was looking at colleges further south, as they had similar temperatures to where I lived and what I was used to. It wasn’t until I ran into an alumni of the school who was telling my parents about it that we decided to check it out. Before that point, we really didn’t even know that Washington existed. Once I looked it up I saw how beautiful the campus was, how great the academics and athletics were, and I sent every coach on the team an email. Luckily they saw it, invited me on a visit, and I just fell in love with the campus, how things were run, how family oriented the team was. It was these things that drew me here.

ELO : How did it feel being back in Australia this past December with Washington in Australia? What was experience like?

Plain. Really, the experience of being in Australia with my American team/family was quite surreal. A few times I had to remind myself of where we were. It was almost like my head couldn’t wrap around the thought that my two worlds were colliding. But it was such an amazing experience to have with the girls. We got to go to places that I had never been before, as well as places that I knew all too well. I just loved being there with them and experiencing so many different things and making so many new memories.

Plain. Well, there are quite a lot of things that are different in Australian softball culture compared to here. The first is that we play by international rules at, I believe, all levels. So I was allowed to leap rather than drag, which caused me some issues when I first got here. I also played with and against boys pretty much all the way up until I came here in local competition, which I think really helped me as it taught me to be calmer, even against those bigger, stronger hitters. There’s also not really any big competition like this back home that goes for so long. There are more just different levels of play all year round, and to get to the next you have to play in the one below. So it’s like a stepping stone set-up. Our top competition usually will go for only a few weeks at most, with the National Championships only going for a week. The culture overall though is very similar. It is very team oriented, as well as competitive, and everyone is always looking to get just that much better to get to those next levels. Every team that you’re apart of is another different, unique, and fun family.

ELO : What it was like playing for Australia Junior National team in 2015 World Championships?

Plain. Playing in the World Championships was an amazing experience. The first time when I was 16 it was an eye opener. It allowed me to see outside of just the sphere that I knew. I was the youngest on the team, so all I wanted to do was learn and do my best. The second time I was more prepared. I knew how strong the outside competition was going to be, and I just wanted to compete alongside my friends to do the best we could. Playing for your country is always such a huge honor, so I was just so happy to be apart of both teams.

ELO : What is it like playing with Taran Alvalo? What you learn most from Taran?

Plain. Playing alongside Taran is such an incredible experience. She brings so much to every game, puts everything on the line for the team, and just puts her whole soul out there. She is such an energetic and incredible person. Just being around her makes you want to be happy and bubbly and get going. The biggest thing that she’s passed onto me is just to be yourself and go out there and leave everything on the field. If you know you have done everything you could in every circumstance then you know you have given it your all and you should feel accomplished with that.

ELO : What goals you have for yourself at Washington on and off the field? Whats your goals post Washington?

Plain. On the field, my goals are to go out there, be consistent, have fun and just grasp every moment you have, because this experience will go past so fast and I want to take every chance I have to be there for the team and enjoy this great game. Off the field, I’ve just really focused on maintaining my consistency with everything that I do, whether it’s training, or in class, but definitely pitching. In class, I’ve set myself a standard of at least 3.5 average GPA’s per quarter, and so far I’ve been sticking to this really well and I just want to continue to get better and better and maintain this average